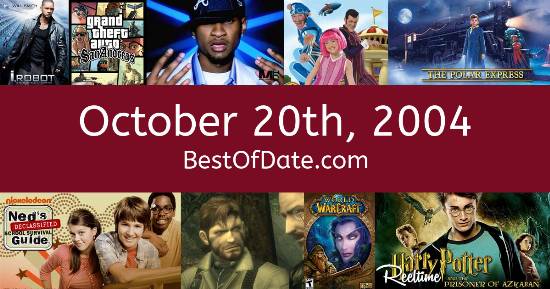 These songs were on top of the music charts in the United States and the United Kingdom on October 20th, 2004.

The top "Box Office" movie on this date was the film "Shark Tale".

The date is October 20th, 2004, and it's a Wednesday. Anyone born today will have the star sign Libra. The summer is long gone. Temperatures have started to become much cooler and the evenings are beginning to get darker.

Fallen leaves have carpeted driveways, lawns, pathways and sidewalks and there's a fresh earthy scent in the ear. Halloween of 2004 is quickly approaching and stores are selling costumes and decorations. In America, the song Goodies by Ciara is on top of the singles charts.

Over in the UK, Call On Me by Eric Prydz is the number one hit song. George W. Bush Jnr. is currently the President of the United States, and the movie Shark Tale is at the top of the Box Office. In the United Kingdom, Tony Blair is the current Prime Minister.

On TV, people are watching popular shows such as "CSI: Miami", "Two and a Half Men", "The Apprentice" and "Joey". Meanwhile, gamers are playing titles such as "Call of Duty", "Ratchet & Clank: Going Commando", "Tom Clancy's Splinter Cell: Pandora Tomorrow" and "Rome: Total War". Children and teenagers are currently watching television shows such as "Teen Titans", "One Tree Hill", "Drake & Josh" and "Unfabulous".

Popular toys at the moment include the likes of the PlayStation 2, the Xbox, Beyblades (spinning top toys) and VideoNow (portable player).

These are trending news stories and fads that were prevalent at this time. These are topics that would have been in the media on October 20th, 2004.

Check out our personality summary for people who were born on October 20th, 2004.

If you are looking for some childhood nostalgia, then you should check out October 20th, 2010 instead.

George W. Bush Jnr. was the President of the United States on October 20th, 2004.

Tony Blair was the Prime Minister of the United Kingdom on October 20th, 2004.

Enter your date of birth below to find out how old you were on October 20th, 2004.
This information is not transmitted to our server.

Here are some fun statistics about October 20th, 2004.