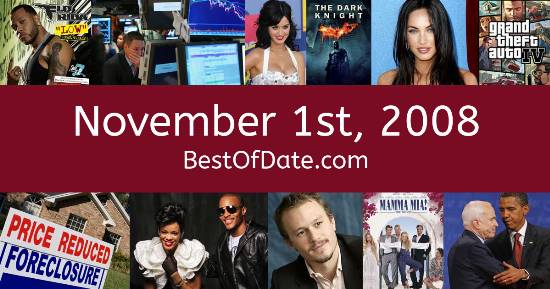 Songs that were on top of the music singles charts in the USA and the United Kingdom on November 1st, 2008.

The following comments about November 1st, 2008 were written by our visitors.

The date is November 1st, 2008, and it's a Saturday. Anyone born today will have the star sign Scorpio. Currently, people are enjoying their weekend.

Halloween has just come and passed. It's November, so the evenings are getting darker and the days are getting colder. In America, the song Whatever You Like by T.I. is on top of the singles charts.

Over in the UK, The Promise by Girls Aloud is the number one hit song. George W. Bush Jnr. is currently the President of the United States, and the movie High School Musical 3 is at the top of the Box Office. In the United Kingdom, Gordon Brown is the current Prime Minister.

Practically every teenager and adult has a MySpace or a Bebo account. Meanwhile, in technology news, more and more people are beginning to use the Internet on their phones. This transition towards mobile Internet has been aided by the recent roll-out of faster 3G networks and the introduction of larger touchscreen phones. A social network called Facebook is beginning to surge in popularity, replacing the likes of MySpace.

Video rental stores such as Blockbuster are currently struggling to keep their heads above water. This is due to the popularity of new online streaming services such as Netflix and Hulu. It's 2008, so the music charts are filled with artists such as Flo Rida, Katy Perry, Rihanna and T.I. Barack Obama and John McCain are currently facing off against each other in the lead-up to the 2008 US Presidential Election.

If you were to travel back to this day, notable figures such as John Costelloe, Test, Natasha Richardson and Jade Goody would all be still alive. On TV, people are watching popular shows such as "King of the Hill", "It's Always Sunny in Philadelphia", "How I Met Your Mother" and "Friday Night Lights". Meanwhile, gamers are playing titles such as "Guitar Hero III: Legends of Rock", "Rock Band", "Burnout Paradise" and "Grand Theft Auto IV".

Children and teenagers are currently watching television shows such as "Johnny Test", "Everybody Hates Chris", "The Hills" and "Curious George". Popular toys at the moment include the likes of the Xbox 360, the PlayStation 3, Iggle Piggle and WALL-E toys.

These are trending news stories and fads that were prevalent at this time. These are topics that would have been in the media on November 1st, 2008.

News stories, pop culture trends, and other events that happened around November 1st, 2008.

Check out our personality summary for people who were born on November 1st, 2008.

If you are looking for some childhood nostalgia, then you should check out November 1st, 2014, instead.

Celebrities, historical figures, and other notable people who were born on November 1st.

George W. Bush Jnr. was the President of the United States on November 1st, 2008.

Find out what your age was on November 1st, 2008, by entering your DOB below.
This information is not saved on our server.

Here are some fun statistics about November 1st, 2008.