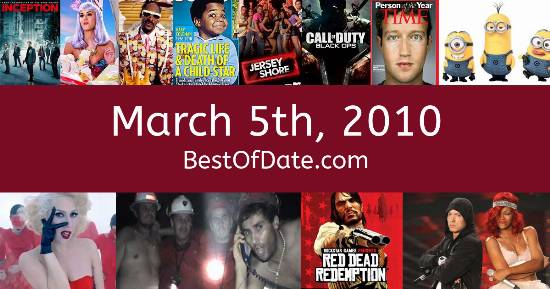 Songs that were on top of the music singles charts in the USA and the United Kingdom on March 5th, 2010.

The date is March 5th, 2010 and it's a Friday. Anyone born today will have the star sign Pisces. Currently, people have "that Friday feeling" and are looking forward to the weekend.

Spring has started to creep in and the days are beginning to get longer. In America, the song Tik Tok by Kesha is on top of the singles charts. Over in the UK, In My Head by Jason Derulo is the number one hit song.

Barack Obama is currently the President of the United States and the movie Shutter Island is at the top of the Box Office. In the United Kingdom, Gordon Brown is the current Prime Minister. The term "hipster" is currently growing in use. The word is being used to describe people who are pretentious and deliberately anti-mainstream.

The slang phrase "Come at me bro" is starting to become popular on the Internet. It has been announced that soccer star Ashley Cole and pop singer Cheryl Tweedy will be separating. The announcement follows allegations that Cole had been unfaithful on a number of occasions. A new and catchy song called "We No Speak Americano" has just been released by Yolanda Be Cool and DCUP.

In soccer, there is drama as Wayne Bridge refuses to shake John Terry's hand. The refusal comes on the back of reports that Terry had an extramarital affair with Bridge's ex-girlfriend. The scheduled sentencing for rap star Lil Wayne has just been postponed due to a fire breaking out in court. A new FPS game "Battlefield: Bad Company 2" has just been released.

If you were to travel back to this day, notable figures such as Corey Haim, Chris Kanyon, Paul Gray and Gary Coleman would all be still alive. On TV, people are watching popular shows such as "CSI: Miami", "CSI: NY", "Glee" and "Community". Meanwhile, gamers are playing titles such as "Resident Evil 5", "Farmville", "Left 4 Dead 2" and "Battlefield: Bad Company 2".

Kids and teenagers are watching TV shows such as "Ben 10", "Mickey Mouse Clubhouse", "Sonny with a Chance" and "Team Umizoomi". Popular toys at the moment include the likes of the Xbox 360, ZhuZhu Pets, the KidiZoom Camera and ZhuZhu Pets.

If you are looking for some childhood nostalgia, then check out March 5th, 2016 instead.

English singer. Deceased
Born on March 5th, 1958
He was not alive on this date.

Barack Obama was the President of the United States on March 5th, 2010.

Gordon Brown was the Prime Minister of the United Kingdom on March 5th, 2010.

Enter your date of birth below to find out how old you were on March 5th, 2010.

Here are some fun statistics about March 5th, 2010.