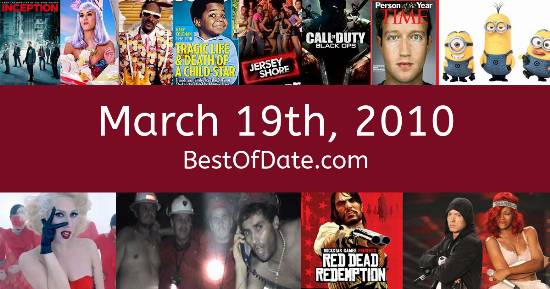 Songs that were on top of the music singles charts in the USA and the United Kingdom on March 19th, 2010.

The date is March 19th, 2010 and it's a Friday. Anyone born today will have the star sign Pisces. Currently, people have "that Friday feeling" and are looking forward to the weekend.

Spring has arrived and the days have become longer. St. Patrick's Day of 2010 has recently come and gone. In America, the song Imma Be by Black Eyed Peas is on top of the singles charts.

Over in the UK, Pass Out by Tinie Tempah is the number one hit song. Barack Obama is currently the President of the United States and the movie Alice in Wonderland is at the top of the Box Office. In the United Kingdom, Gordon Brown is the current Prime Minister.

An Old Spice advertisement called "The Man Your Man Could Smell Like", starring Isaiah Mustafa, is extremely popular at the moment. The slang phrase "Come at me bro" is starting to become popular on the Internet. Rap star Lil Wayne has been sentenced to one year in prison for attempted criminal possession of a weapon.

In celebrity news, comedian Sacha Baron and actress Isla Fisher have just tied the knot in Paris. The last episode of the comedy series Scrubs has just been aired on television. Monster Garage host Jesse James has publicly apologized to his actress wife Sandra Bullock for being unfaithful to her.

If you were to travel back to this day, notable figures such as Chris Kanyon, Paul Gray, Gary Coleman and Lance Cade would all be still alive. On TV, people are watching popular shows such as "King of the Hill", "Smallville", "Cold Case" and "Glee". Meanwhile, gamers are playing titles such as "Mafia Wars", "Batman: Arkham Asylum", "Left 4 Dead 2" and "Heavy Rain".

Kids and teenagers are watching TV shows such as "Ben 10", "Mickey Mouse Clubhouse", "iCarly" and "Sonny with a Chance". If you're a kid or a teenager, then you're probably playing with toys such as the Xbox 360, ZhuZhu Pets, the KidiZoom Camera and ZhuZhu Pets.

If you are looking for some childhood nostalgia, then check out March 19th, 2016 instead.

Barack Obama was the President of the United States on March 19th, 2010.

Gordon Brown was the Prime Minister of the United Kingdom on March 19th, 2010.

Enter your date of birth below to find out how old you were on March 19th, 2010.