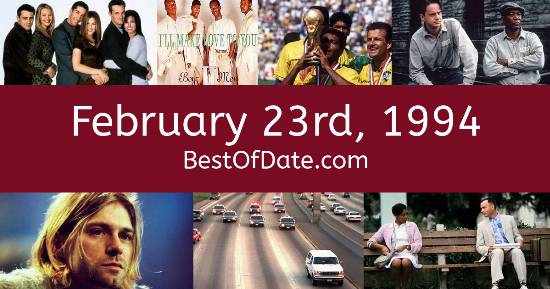 On February 23rd, 1994, the following songs were at the top of the music charts in the USA and the UK.

The top "Box Office" movie on this date was the film "On Deadly Ground".

The date is February 23rd, 1994, and it's a Wednesday. Anyone born today will have the star sign Pisces. In America, the song The Power Of Love by Celine Dion is on top of the singles charts.

Over in the UK, Without You by Mariah Carey is the number one hit song. Bill Clinton is currently the President of the United States, and the movie On Deadly Ground is at the top of the Box Office. In the United Kingdom, John Major is the current Prime Minister.

In Europe, a war is continuing to rage on in Bosnia and Herzegovina. If you were to travel back to this day, notable figures such as Bill Hicks, John Candy, Kurt Cobain and Richard Nixon would all be still alive. On TV, people are watching popular shows such as "Last of the Summer Wine", "Melrose Place", "Star Trek: Deep Space Nine" and "Beavis and Butt-Head".

Meanwhile, gamers are playing titles such as "Mortal Kombat", "Bubsy in Claws Encounters of the Furred Kind", "Myst" and "Doom". Kids and teenagers are watching TV shows such as "Full House", "Teenage Mutant Ninja Turtles", "Are You Afraid of the Dark?" and "Home Improvement". If you're a kid or a teenager, then you're probably playing with toys such as Cabbage Patch Kids, Screwball Scramble, Jenga and Power Rangers figures.

These are trending news stories and fads that were prevalent at this time. These are topics that would have been in the media on February 23rd, 1994.

News stories and other events that happened around February 23rd, 1994.

Check out our personality summary for people who were born on February 23rd, 1994.

If you are looking for some childhood nostalgia, then you should check out February 23rd, 2000 instead.

Bill Clinton was the President of the United States on February 23rd, 1994.

John Major was the Prime Minister of the United Kingdom on February 23rd, 1994.

Find out what your age was on February 23rd, 1994, by entering your DOB below.
This information is not saved on our server.

Here are some fun statistics about February 23rd, 1994.