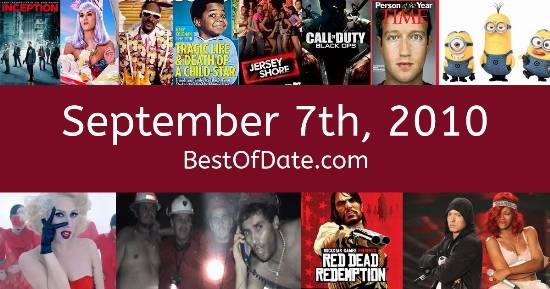 September 7th, 2010 relates to an event in a movie, book, game or television series:

Songs that were on top of the music singles charts in the USA and the United Kingdom on September 7th, 2010:

The date is September 7th, 2010 and it's a Tuesday. Anyone born today will have the star sign Virgo. Schools have started back and autumn has arrived, so temperatures have started to cool and trees are beginning to shed their leaves.

In America, the song Love The Way You Lie by Eminem ft Rihanna is on top of the singles charts. Over in the UK, Please Don't Let Me Go by Olly Murs is the number one hit song. Barack Obama is currently the President of the United States and the movie The American is at the top of the Box Office.

Rescuers in Chile are currently working to release 33 men who have become trapped following a cave-in at a gold and copper mine near the city of Copiapó. The ongoing effort to rescue the miners is receiving widespread media attention. On TV, people are watching popular shows such as "Extreme Makeover: Home Edition", "Desperate Housewives", "The Office" and "Community". Meanwhile, gamers are playing titles such as "Halo 3: ODST", "Battlefield: Bad Company 2", "Alan Wake" and "Red Dead Redemption".

Kids and teenagers are watching TV shows such as "Dora the Explorer", "Peppa Pig", "iCarly" and "Team Umizoomi". Popular toys include the likes of "Xbox 360", "PlayStation 3", "ZhuZhu Pets" and "iPad".

Who was the Prime Minister of the United Kingdom on September 7th, 2010?

Enter your date of birth below to find out how old you were on September 7th, 2010.

Looking for some nostalgia? Here are some Youtube videos relating to September 7th, 2010. Please note that videos are automatically selected by Youtube and that results may vary! Click on the "Load Next Video" button to view the next video in the search playlist. In many cases, you'll find episodes of old TV shows, documentaries, music videos and soap dramas.

Here are some fun statistics about September 7th, 2010.