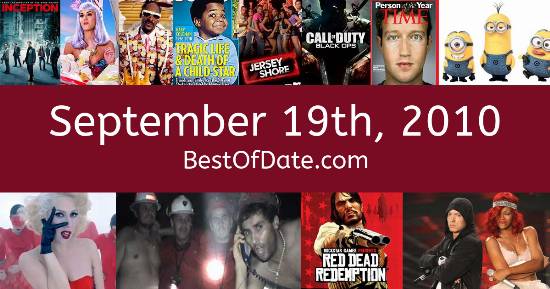 These songs were on top of the music charts in the United States and the United Kingdom on September 19th, 2010.

The movie "The Town" was at the top of the Box Office on this day.

The date is September 19th, 2010, and it's a Sunday. Anyone born today will have the star sign Virgo. Currently, people are enjoying their weekend.

Schools and colleges are starting again and Autumn has officially arrived. As a result, temperatures are beginning to cool and trees are starting to shed their leaves. The earthy smells of fall have started to fill the air. In America, the song Love The Way You Lie by Eminem ft Rihanna is on top of the singles charts.

Over in the UK, Start Without You by Alexandra Burke is the number one hit song. Barack Obama is currently the President of the United States, and the movie The Town is at the top of the Box Office. In the United Kingdom, David Cameron is the current Prime Minister.

Rescuers in Chile are currently working to release 33 men who have become trapped following a cave-in at a gold and copper mine near the city of Copiapó. The ongoing effort to rescue the miners is receiving widespread media attention. Lady Gaga's "Bad Romance" has just won the "Video of the Year" award 2010 at the MTV VMAs. In Ireland, Taoiseach Brian Cowen is being accused of being drunk or hungover during his recent interview on RTE's "Morning Ireland".

If you were to travel back to this day, notable figures such as Denise Borino-Quinn, Leslie Nielsen, Pete Postlethwaite and Nate Dogg would all be still alive. On TV, people are watching popular shows such as "Skins", "Gossip Girl", "RuPaul's Drag Race" and "The Vampire Diaries". Meanwhile, gamers are playing titles such as "Pokémon Platinum", "Farmville", "Halo 3: ODST" and "Halo: Reach".

Children and teenagers are currently watching television shows such as "Go, Diego, Go!", "Hannah Montana", "Curious George" and "Team Umizoomi". If you're a kid or a teenager, then you're probably playing with toys such as the PlayStation 3, Iggle Piggle, the KidiZoom Camera and the iPad.

These are trending news stories and fads that were prevalent at this time. These are topics that would have been in the media on September 19th, 2010.

News stories and other events that happened around September 19th, 2010.

Check out our personality summary for people who were born on September 19th, 2010.

If you are looking for some childhood nostalgia, then you should check out September 19th, 2016 instead.

Barack Obama was the President of the United States on September 19th, 2010.

Find out what your age was on September 19th, 2010, by entering your DOB below.
This information is not saved on our server.

Here are some fun statistics about September 19th, 2010.