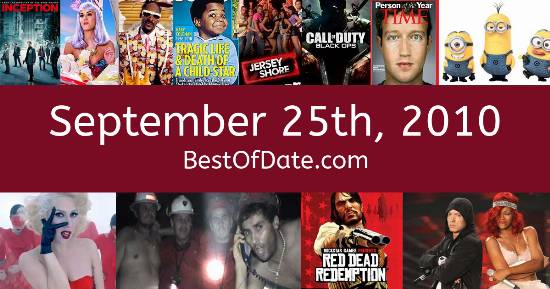 September 25th, 2010 relates to an event in a movie, book, game or television series:

Songs that were on top of the music singles charts in the USA and the United Kingdom on September 25th, 2010:

The date is September 25th, 2010 and it's a Saturday. Anyone born today will have the star sign Libra. Currently, people are enjoying their weekend.

Schools have started back and autumn has arrived, so temperatures have started to cool and trees are beginning to shed their leaves. The earthy smells of fall have started to fill the air. In America, the song Teenage Dream by Katy Perry is on top of the singles charts.

Over in the UK, Start Without You by Alexandra Burke is the number one hit song. Barack Obama is currently the President of the United States and the movie Wall Street 2 is at the top of the Box Office. In the United Kingdom, David Cameron is the current Prime Minister.

The term "hipster" is currently growing in use. The word is being used to describe people who are pretentious and deliberately anti-mainstream. It's 2010, so the music charts are being dominated by artists such as Kesha, Katy Perry, Rihanna, Eminem and Bruno Mars. Rescuers in Chile are currently working to release 33 men who have become trapped following a cave-in at a gold and copper mine near the city of Copiapó. The ongoing effort to rescue the miners is receiving widespread media attention.

In the UK, Ed Miliband has just become the new leader of the Labour Party. On TV, people are watching popular shows such as "Two and a Half Men", "How I Met Your Mother", "Breaking Bad" and "Real Housewives of New York City". Meanwhile, gamers are playing titles such as "Assassin's Creed II", "Left 4 Dead 2", "God of War III" and "Halo: Reach".

Children and teenagers are currently watching television shows such as "One Tree Hill", "Go, Diego, Go!", "Curious George" and "iCarly". Popular toys include the likes of "Xbox 360", "PlayStation 3", "ZhuZhu Pets" and "iPad".

Who was the Prime Minister of the United Kingdom on September 25th, 2010?

Enter your date of birth below to find out how old you were on September 25th, 2010.

Looking for some nostalgia? Here are some Youtube videos relating to September 25th, 2010. Please note that videos are automatically selected by Youtube and that results may vary! Click on the "Load Next Video" button to view the next video in the search playlist. In many cases, you'll find episodes of old TV shows, documentaries, music videos and soap dramas.

Here are some fun statistics about September 25th, 2010.