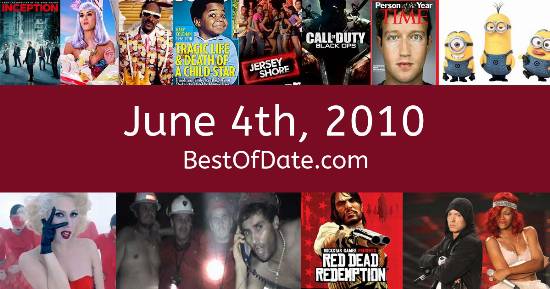 Songs that were on top of the music singles charts in the USA and the United Kingdom on June 4th, 2010.

The date is June 4th, 2010 and it's a Friday. Anyone born today will have the star sign Gemini. Currently, people have "that Friday feeling" and are looking forward to the weekend.

It's summer, so the temperatures are warmer and the evenings are longer than usual. In America, the song OMG by Usher ft will.i.am is on top of the singles charts. Over in the UK, Dirtee Disco by Dizzee Rascal is the number one hit song.

Barack Obama is currently the President of the United States and the movie Shrek Forever After is at the top of the Box Office. In the United Kingdom, David Cameron is the current Prime Minister. The term "hipster" is currently growing in use. The word is being used to describe people who are pretentious and deliberately anti-mainstream.

Video rental stores such as Blockbuster are continuing to close their doors at the moment. This is due to the increasing popularity of online streaming services such as Netflix and Hulu. It's 2010, so the music charts are being dominated by artists such as Kesha, Katy Perry, Rihanna, Eminem and Bruno Mars. In soccer, Jose Mourinho's side Inter Milan have just won the 2010 UEFA Champions League after beating Bayern Munich 2-0 in the final. Following the win, it has been announced that Mourinho will be taking over as the new manager of Spanish side Real Madrid.

Tributes are pouring in for actor Gary Coleman, who has passed away at the age of 42. In showbiz news, singer Shania Twain has divorced her husband Robert John Lange after 14 years of marriage. Germany have won the Eurovision Song Contest with the song "Satellite" by Lena.

Actress Rue McClanahan, who portrayed Blanche Devereaux on The Golden Girls, has passed away at the age of 76 after suffering from a brain hemorrhage. In celebrity news, Friends actor David Schwimmer has married 25-year-old Zoe Buckman in a private ceremony. If you were to travel back to this day, notable figures such as Lance Cade, Denise Borino-Quinn, Pete Postlethwaite and Nate Dogg would all be still alive.

On TV, people are watching popular shows such as "Gossip Girl", "The Big Bang Theory", "Sons of Anarchy" and "Jersey Shore". Meanwhile, gamers are playing titles such as "League of Legends", "Assassin's Creed II", "Mass Effect 2" and "God of War III". Children and teenagers are currently watching television shows such as "LazyTown", "Horrid Henry", "Phineas and Ferb" and "Big Time Rush".

If you're a kid or a teenager, then you're probably playing with toys such as the Xbox 360, the PlayStation 3, the KidiZoom Camera and ZhuZhu Pets.

If you are looking for some childhood nostalgia, then check out June 4th, 2016 instead.

Barack Obama was the President of the United States on June 4th, 2010.

David Cameron was the Prime Minister of the United Kingdom on June 4th, 2010.

Enter your date of birth below to find out how old you were on June 4th, 2010.

Here are some fun statistics about June 4th, 2010.