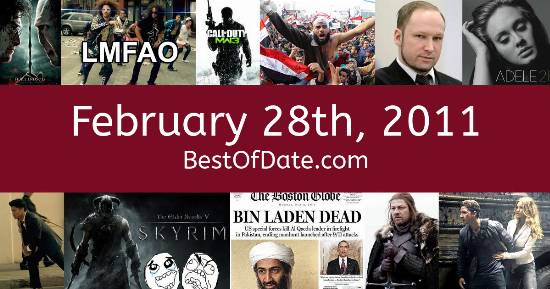 On February 28th, 2011, the following songs were at the top of the music charts in the USA and the UK.

The top "Box Office" movie on this date was the film "Hall Pass".

I remember this day really well for some reason. I was in college and my lecturer was expressing his delight at how Fianna Fail had lost so many seats in the election. It was such a tumultuous time in Irish history.
Posted on April 11th, 2022 00:36

The date is February 28th, 2011, and it's a Monday. Anyone born today will have the star sign Pisces. In America, the song Born This Way by Lady Gaga is on top of the singles charts.

Over in the UK, Someone Like You by Adele is the number one hit song. Barack Obama is currently the President of the United States, and the movie Hall Pass is at the top of the Box Office. In the United Kingdom, David Cameron is the current Prime Minister.

A wave of demonstrations and protests have been taking place across the Middle East, in what has become known as the "Arab Spring". It's 2011, so the music charts are being dominated by artists such as Adele, Maroon 5, LMFAO, Katy Perry, Rihanna and Bruno Mars. 181 people have tragically lost their lives following an earthquake in the city of Christchurch, New Zealand. Search and rescue operations are currently ongoing.

In Ireland, Fianna Fail have just been heavily defeated in the 2011 General Election. The party, which has been in power since 1997, has lost 51 seats, making it the worst defeat of a sitting government in the history of the country. Recent protests in Libya have grown into a Civil War. Anti-government forces are now setting up blockades in cities. UK Prime Minister David Cameron is calling for a No Fly Zone over the county and US Secretary of State Hillary Clinton is demanding that Colonel Gaddafi step down from power. Meanwhile, the US Navy has began to position ships near the coast of Libya. If you were to travel back to this day, notable figures such as Nate Dogg, Elizabeth Taylor, Randy Savage and Ryan Dunn would all be still alive.

On TV, people are watching popular shows such as "Smallville", "Two and a Half Men", "The Vampire Diaries" and "Boardwalk Empire". Meanwhile, gamers are playing titles such as "Farmville", "Halo: Reach", "Assassin's Creed: Brotherhood" and "Dead Space 2". Children and teenagers are currently watching television shows such as "Dora the Explorer", "LazyTown", "Horrid Henry" and "Team Umizoomi".

If you're a kid or a teenager, then you're probably playing with toys such as the Xbox 360, the PlayStation 3, the KidiZoom Camera and the iPad.

These are trending news stories and fads that were prevalent at this time. These are topics that would have been in the media on February 28th, 2011.

Check out our personality summary for people who were born on February 28th, 2011.

Television shows that people were watching in February, 2011.

Popular video games that people were playing in February of 2011.

If you are looking for some childhood nostalgia, then you should check out February 28th, 2017 instead.

Model and actress. Deceased
Born on February 28th, 1960
She was not alive on this date.

Barack Obama was the President of the United States on February 28th, 2011.

Enter your date of birth below to find out how old you were on February 28th, 2011.
This information is not transmitted to our server.

Here are some fun statistics about February 28th, 2011.