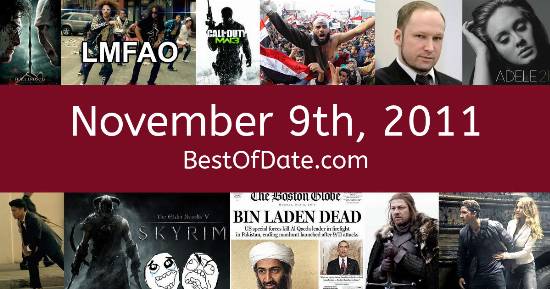 Songs that were on top of the music singles charts in the USA and the United Kingdom on November 9th, 2011.

The date is November 9th, 2011 and it's a Wednesday. Anyone born today will have the star sign Scorpio. It's November, so the evenings are getting darker and the days are getting colder.

In America, the song Someone Like You by Adele is on top of the singles charts. Over in the UK, Read All About It by Professor Green is the number one hit song. Barack Obama is currently the President of the United States and the movie Puss in Boots is at the top of the Box Office.

There is shock following the news that Penn State assistant coach Jerry Sandusky has been arrested for sex crimes against young boys. Former heavyweight boxing champion Joe Frazier has passed away at the age of 67 from liver cancer. The FPS game "Call of Duty: Modern Warfare 3" has just been released by Infinity Ward.

If you were to travel back to this day, notable figures such as Gary Speed, Christopher Hitchens, Whitney Houston and Edd Gould would all be still alive. On TV, people are watching popular shows such as "Extreme Makeover: Home Edition", "CSI: NY", "Sons of Anarchy" and "Jersey Shore". Meanwhile, gamers are playing titles such as "Assassin's Creed: Brotherhood", "Duke Nukem Forever", "L.A. Noire" and "Battlefield 3".

Children and teenagers are currently watching television shows such as "Peppa Pig", "Big Time Rush", "Team Umizoomi" and "Good Luck Charlie". Popular toys at the moment include the likes of the Xbox 360, the PlayStation 3, the KidiZoom Camera and the LeapPad Explorer.

If you are looking for some childhood nostalgia, then check out November 9th, 2017 instead.

Scientist. Deceased
Born on November 9th, 1934
He was not alive on this date.

Barack Obama was the President of the United States on November 9th, 2011.

David Cameron was the Prime Minister of the United Kingdom on November 9th, 2011.

Enter your date of birth below to find out how old you were on November 9th, 2011.

Here are some fun statistics about November 9th, 2011.

Have something to say about November 9th, 2011?