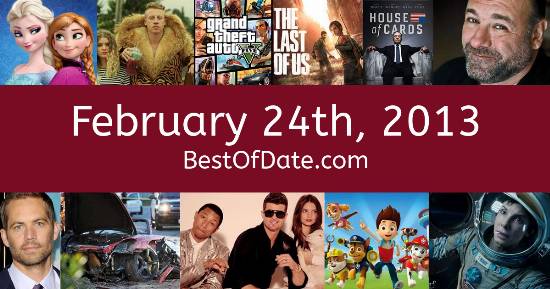 Songs that were on top of the music singles charts in the USA and the United Kingdom on February 24th, 2013.

The date is February 24th, 2013 and it's a Sunday. Anyone born today will have the star sign Pisces. Currently, people are enjoying their weekend.

In America, the song Thrift Shop by Macklemore & Ryan Lewis is on top of the singles charts. Over in the UK, One Way Or AAnother by One Direction is the number one hit song. Barack Obama is currently the President of the United States and the movie Identity Thief is at the top of the Box Office.

A new video-hosting service called "Vine" has just been launched. An Internet meme called "The Harlem Shake" is currently going viral. The 85th Academy Awards have just been held. Daniel Day-Lewis has won an Oscar for his performance in the movie Lincoln. Jennifer Lawrence has won Best Actress for her role in the movie Silver Linings Playbook.

On TV, people are watching popular shows such as "The Vampire Diaries", "Community", "Game of Thrones" and "Black Mirror". Meanwhile, gamers are playing titles such as "Mass Effect 3", "Sleeping Dogs", "Dead Space 3" and "Aliens: Colonial Marines". Kids and teenagers are watching TV shows such as "Curious George", "Phineas and Ferb", "Jake and the Never Land Pirates" and "Doc McStuffins".

If you're a kid or a teenager, then you're probably playing with toys such as the Xbox 360, the PlayStation 3, Skylanders Giants figures and the Wii U.

If you are looking for some childhood nostalgia, then check out February 24th, 2019 instead.

Entrepreneur. Deceased
Born on February 24th, 1955
He was not alive on this date.

Barack Obama was the President of the United States on February 24th, 2013.

David Cameron was the Prime Minister of the United Kingdom on February 24th, 2013.

Enter your date of birth below to find out how old you were on February 24th, 2013.

Here are some fun statistics about February 24th, 2013.