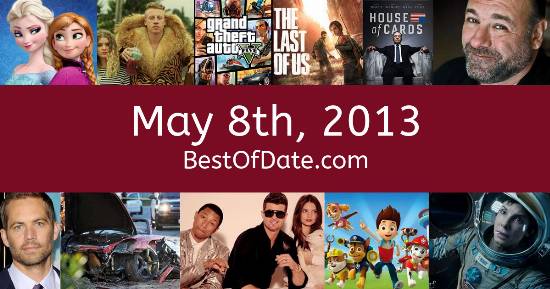 Songs that were on top of the music singles charts in the USA and the United Kingdom on May 8th, 2013:

The date is May 8th, 2013 and it's a Wednesday. Anyone born today will have the star sign Taurus. The summer of 2013 has finally arrived. The weather has warmed up and the evenings are brighter than usual.

In the United Kingdom, David Cameron is the current Prime Minister. It's 2013, so the music charts are being dominated by artists such as Macklemore, Robin Thicke, Imagine Dragons and Bruno Mars. The world is shocked by news that Amanda Berry, Michelle Knight and Georgina DeJesus have been found alive in Cleveland, Ohio after 11 years of being missing. The three women had been imprisoned by a man called Ariel Castro up until recently, when Amanda Berry and her daughter managed to escape and alert authorities.

Rap star Ja Rule has just been released from prison after serving time for tax evasion. In soccer, Manchester United manager Alex Ferguson has just announced that he is retiring. The news has come as a shock to many, with pundits referring to it as "the end of an era." On TV, people are watching popular shows such as "Two and a Half Men", "RuPaul's Drag Race", "Modern Family" and "Suits".

Meanwhile, gamers are playing titles such as "Diablo III", "Halo 4", "Dead Space 3" and "Tomb Raider". Children and teenagers are currently watching television shows such as "Peppa Pig", "Curious George", "Big Time Rush" and "Good Luck Charlie". Popular toys include the likes of "Xbox 360", "PlayStation 3" and "The Wii U".

Notable events that occurred around May 8th, 2013:

Who was the Prime Minister of the United Kingdom on May 8th, 2013?

Enter your date of birth below to find out how old you were on May 8th, 2013.

Looking for some nostalgia? Here are some Youtube videos relating to May 8th, 2013. Please note that videos are automatically selected by Youtube and that results may vary! Click on the "Load Next Video" button to view the next video in the search playlist. In many cases, you'll find episodes of old TV shows, documentaries, music videos and soap dramas.