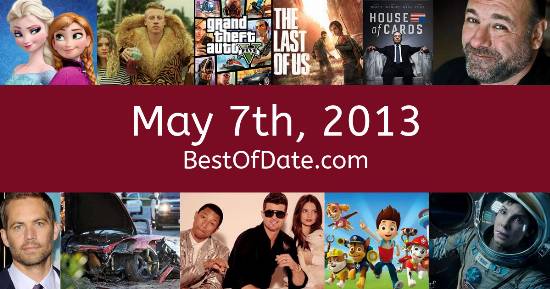 Songs that were on top of the music singles charts in the USA and the United Kingdom on May 7th, 2013.

The date is May 7th, 2013 and it's a Tuesday. Anyone born today will have the star sign Taurus. The summer of 2013 has finally arrived. The weather has warmed up and the evenings are brighter than usual.

The world is shocked by news that Amanda Berry, Michelle Knight and Georgina DeJesus have been found alive in Cleveland, Ohio after 11 years of being missing. The three women had been imprisoned by a man called Ariel Castro up until recently, when Amanda Berry and her daughter managed to escape and alert authorities. Rap star Ja Rule has just been released from prison after serving time for tax evasion. If you were to travel back to this day, notable figures such as James Gandolfini, Cory Monteith, Gia Allemand and Lisa Robin Kelly would all be still alive.

On TV, people are watching popular shows such as "Mad Men", "The Big Bang Theory", "RuPaul's Drag Race" and "House of Cards". Meanwhile, gamers are playing titles such as "Minecraft", "Mark of the Ninja", "Far Cry 3" and "DmC: Devil May Cry". Kids and teenagers are watching TV shows such as "Mickey Mouse Clubhouse", "Horrid Henry", "Lab Rats: Bionic Island" and "Dog with a Blog".

Notable events that occurred around May 7th, 2013.

If you are looking for some childhood nostalgia, then check out May 7th, 2019 instead.

Canadian wrestler. Deceased
Born on May 7th, 1965
He was not alive on this date.

Historical weather information for May 7th, 2013.

Barack Obama was the President of the United States on May 7th, 2013.

David Cameron was the Prime Minister of the United Kingdom on May 7th, 2013.

Enter your date of birth below to find out how old you were on May 7th, 2013.