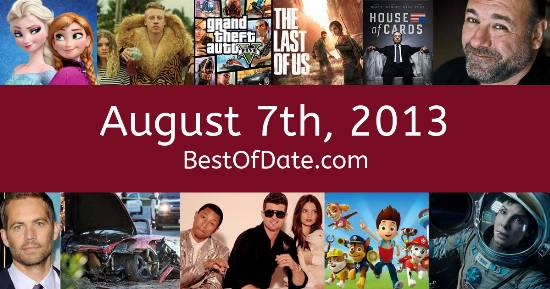 Songs that were on top of the music singles charts in the USA and the United Kingdom on August 7th, 2013:

The date is August 7th, 2013 and it's a Wednesday. Anyone born today will have the star sign Leo. It's summer, so the temperatures are warmer and the evenings are longer than usual.

In America, the song Blurred Lines by Robin Thicke is on top of the singles charts. Over in the UK, We Can't Stop by Miley Cyrus is the number one hit song. Barack Obama is currently the President of the United States and the movie 2 Guns is at the top of the Box Office.

Former NSA contractor Edward Snowden has just revealed to the public that American intelligence agencies have been running a widespread global surveillance programme called PRISM. Video game fans are currently excited about the upcoming release of Grand Theft Auto V. The game, which will take place in San Andreas, is set to be released on September 17th. In Italy, former Prime Minister Silvio Berlusconi has been convicted of tax fraud.

The social network Bebo has been closed down and people are currently reminiscing about how they used to love the website. On TV, people are watching popular shows such as "Sons of Anarchy", "Glee", "Homeland" and "House of Cards". Meanwhile, gamers are playing titles such as "Halo 4", "Call of Duty: Black Ops II", "Dead Space 3" and "Tomb Raider".

Kids and teenagers are watching TV shows such as "Peppa Pig", "LazyTown", "Jessie" and "Dog with a Blog". Popular toys include the likes of "Xbox 360", "PlayStation 3" and "The Wii U".

Who was the Prime Minister of the United Kingdom on August 7th, 2013?

Enter your date of birth below to find out how old you were on August 7th, 2013.

Looking for some nostalgia? Here are some Youtube videos relating to August 7th, 2013. Please note that videos are automatically selected by Youtube and that results may vary! Click on the "Load Next Video" button to view the next video in the search playlist. In many cases, you'll find episodes of old TV shows, documentaries, music videos and soap dramas.

Here are some fun statistics about August 7th, 2013.