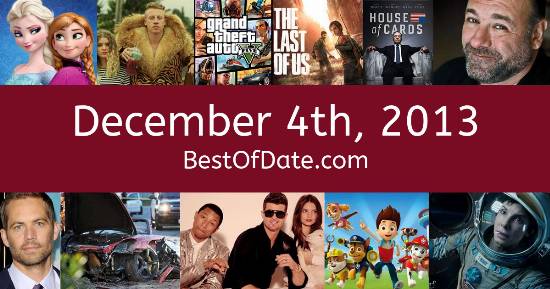 Songs that were on top of the music singles charts in the USA and the United Kingdom on December 4th, 2013:

The date is December 4th, 2013 and it's a Wednesday. Anyone born today will have the star sign Sagittarius. In America, the song Royals by Lorde is on top of the singles charts.

Over in the UK, Somewhere Only We Know by Lily Allen is the number one hit song. Barack Obama is currently the President of the United States and the movie Catching Fire is at the top of the Box Office. In the United Kingdom, David Cameron is the current Prime Minister.

Sony's video game console the "PlayStation 4" has just been released. Meanwhile, Microsoft has also released its competing console the "XBox One". The divorce of Demi Moore and Ashton Kutcher has just been finalized. The cryptocurrency "Bitcoin" has just passed $1,000 USD for the first time.

The world is in shock following the death of actor Paul Walker in a car crash. A mobile game called "Flappy Bird" is currently surging in popularity. British diver Tom Daley has come out as gay in a recent Youtube video.

On TV, people are watching popular shows such as "Two and a Half Men", "Sons of Anarchy", "Glee" and "Suits". Meanwhile, gamers are playing titles such as "DmC: Devil May Cry", "Tomb Raider", "ARMA 3" and "Assassin's Creed IV: Black Flag". Kids and teenagers are watching TV shows such as "Dora the Explorer", "LazyTown", "Team Umizoomi" and "Dog with a Blog".

Popular toys include the likes of "The Wii U", "PlayStation 4" and "Xbox One".

Celebrities, historical figures and noteable people who were born on the 4th of December:

Who was the Prime Minister of the United Kingdom on December 4th, 2013?

Enter your date of birth below to find out how old you were on December 4th, 2013.

Looking for some nostalgia? Here are some Youtube videos relating to December 4th, 2013. Please note that videos are automatically selected by Youtube and that results may vary! Click on the "Load Next Video" button to view the next video in the search playlist. In many cases, you'll find episodes of old TV shows, documentaries, music videos and soap dramas.

Here are some fun statistics about December 4th, 2013.