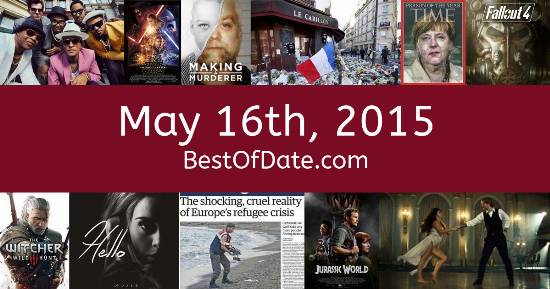 Songs that were on top of the music singles charts in the USA and the United Kingdom on May 16th, 2015:

The date is May 16th, 2015 and it's a Saturday. Anyone born today will have the star sign Taurus. Currently, people are enjoying their weekend.

Barack Obama is currently the President of the United States and the movie Avengers: Age of Ultron is at the top of the Box Office. In the United Kingdom, David Cameron is the current Prime Minister. A social networking website called Vine is extremely popular at the moment.

It's 2015, so the music charts are being dominated by the likes of OMI, Bruno Mars, Ellie Goulding, Adele, Justin Bieber and Hozier. In the United Kingdom, David Cameron's Conservative Party have won a surprise majority. Political commentators in the media are currently discussing how the opinion polls seem to have underestimated the Tory vote. In light of the result, Labour Party leader Ed Miliband has resigned. In Port Richmond, Philadelphia, eight people have been tragically killed in a train derailment.

In Ireland, a referendum campaign is in full swing as people prepare to vote on whether to legalize same-sex marriage or not. Nick Fradiani has just won the 14th season of American Idol and a new VoIP application called "Discord" has recently been released. The world of music is in mourning following the passing of blues singer B.B. King.

Children and teenagers are currently watching television shows such as "Jake and the Never Land Pirates", "Jessie", "Girl Meets World" and "Nicky, Ricky, Dicky & Dawn". Popular toys include the likes of "PlayStation 4" and "Xbox One".

Notable events that occurred around May 16th, 2015:

Who was the Prime Minister of the United Kingdom on May 16th, 2015?

Looking for some nostalgia? Here are some Youtube videos relating to May 16th, 2015. Please note that videos are automatically selected by Youtube and that results may vary! Click on the "Load Next Video" button to view the next video in the search playlist. In many cases, you'll find episodes of old TV shows, documentaries, music videos and soap dramas.