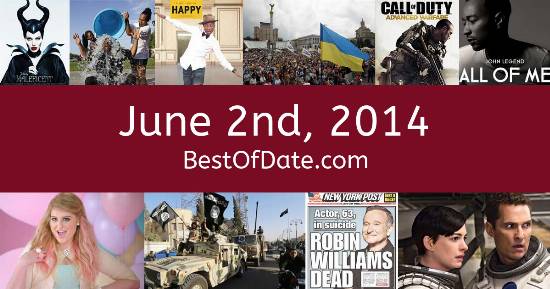 June 2nd, 2014 relates to a fictional event in a movie, book, game or television series.

Songs that were on top of the music singles charts in the USA and the United Kingdom on June 2nd, 2014.

The date is June 2nd, 2014 and it's a Monday. Anyone born today will have the star sign Gemini. It's summer, so the temperatures are warmer and the evenings are longer than usual.

In America, the song All of Me by John Legend is on top of the singles charts. Over in the UK, Stay with Me by Sam Smith is the number one hit song. Barack Obama is currently the President of the United States and the movie Maleficent is at the top of the Box Office.

It is 2014, so the music charts are being dominated by artists such as Pharrell Williams, Katy Perry, John Legend, Iggy Azalea, Meghan Trainor, Lorde and Jason Derulo. The trial of Australian entertainer Rolf Harris for indecent assault is currently underway in England. On TV, people are watching popular shows such as "Glee", "Modern Family", "Black Mirror" and "House of Cards".

Meanwhile, gamers are playing titles such as "The Last of Us", "ARMA 3", "Grand Theft Auto V" and "Battlefield 4". Kids and teenagers are watching TV shows such as "Dora the Explorer", "LazyTown", "Austin & Ally" and "Sam & Cat". Popular toys at the moment include the likes of the Wii U, the PlayStation 4, the Xbox One and Frozen dolls.

If you are looking for some childhood nostalgia, then check out June 2nd, 2020 instead.

Barack Obama was the President of the United States on June 2nd, 2014.

David Cameron was the Prime Minister of the United Kingdom on June 2nd, 2014.

Enter your date of birth below to find out how old you were on June 2nd, 2014.

Here are some fun statistics about June 2nd, 2014.