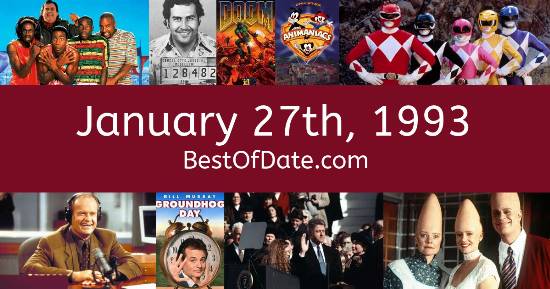 Songs that were on top of the music singles charts in the USA and the United Kingdom on January 27th, 1993.

The date is January 27th, 1993 and it's a Wednesday. Anyone born today will have the star sign Aquarius. The song I Will Always Love You by Whitney Houston is on top of the singles charts in both the USA and the United Kingdom.

Bill Clinton is currently the President of the United States and the movie A Few Good Men is at the top of the Box Office. In the United Kingdom, John Major is the current Prime Minister. Texting is not a thing yet. Instead, people are using landline phones and pagers. Furthermore, the vast majority of people still have no idea what "the Internet" is.

If you were to travel back to this day, notable figures such as Andre the Giant, Bobby Moore, Brandon Lee and Conway Twitty would all be still alive. On TV, people are watching popular shows such as "Last of the Summer Wine", "Cheers", "Family Matters" and "Melrose Place". Meanwhile, gamers are playing titles such as "Duck Hunt", "The Legend of Zelda: A Link to the Past", "Final Fantasy V" and "Tecmo NBA Basketball".

Kids and teenagers are watching TV shows such as "Garfield and Friends", "Mr. Bean", "The Fresh Prince of Bel-Air" and "Rugrats". If you're a kid or a teenager, then you're probably playing with toys such as Cabbage Patch Kids, Pogo ball / Lolo ball, the SEGA Game Gear and Pogs / Milkcaps.

If you are looking for some childhood nostalgia, then check out January 27th, 1999 instead.

Bill Clinton was the President of the United States on January 27th, 1993.

John Major was the Prime Minister of the United Kingdom on January 27th, 1993.

Enter your date of birth below to find out how old you were on January 27th, 1993.

Here are some fun statistics about January 27th, 1993.