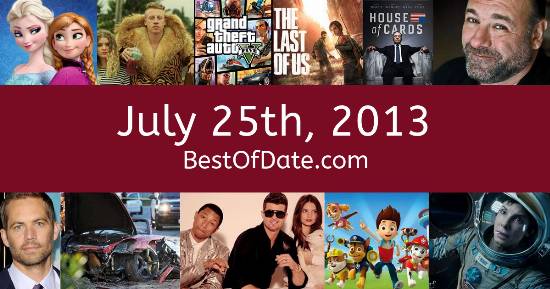 Songs that were on top of the music singles charts in the USA and the United Kingdom on July 25th, 2013.

The date is July 25th, 2013 and it's a Thursday. Anyone born today will have the star sign Leo. It's summer, so the temperatures are warmer and the evenings are longer than usual.

A social networking website called Vine is extremely popular at the moment. Former NSA contractor Edward Snowden has just revealed to the public that American intelligence agencies have been running a widespread global surveillance programme called PRISM. In the UK, Catherine Middleton has just given birth to Prince George.

Former Democratic congressman Anthony Weiner, who is currently running in the New York City mayoral race, has just been caught up in a second "sexting scandal". If you were to travel back to this day, notable figures such as Gia Allemand, Lisa Robin Kelly, Lee Thompson Young and Paul Walker would all be still alive. On TV, people are watching popular shows such as "How I Met Your Mother", "Community", "White Collar" and "Once Upon a Time".

Meanwhile, gamers are playing titles such as "Mark of the Ninja", "XCOM: Enemy Unknown", "Call of Duty: Black Ops II" and "Tomb Raider". Kids and teenagers are watching TV shows such as "Curious George", "WordGirl", "Glee" and "Good Luck Charlie". Popular toys at the moment include the likes of the PlayStation 3, Skylanders Giants figures, the Wii U and Rainbow Loom.

If you are looking for some childhood nostalgia, then check out July 25th, 2019 instead.

Barack Obama was the President of the United States on July 25th, 2013.

David Cameron was the Prime Minister of the United Kingdom on July 25th, 2013.