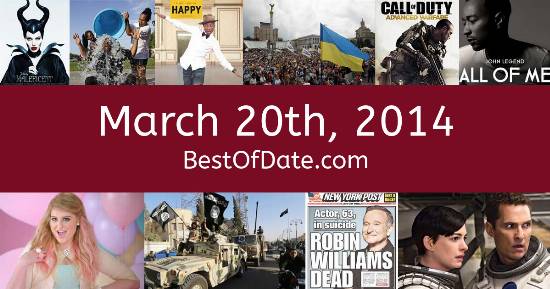 Songs that were on top of the music singles charts in the USA and the United Kingdom on March 20th, 2014:

The date is March 20th, 2014 and it's a Thursday. Anyone born today will have the star sign Pisces. Spring has arrived and the days have become longer.

St. Patrick's Day of 2014 has recently come and gone. In America, the song Happy by Pharrell Williams is on top of the singles charts. Over in the UK, My Love by Route 94 featuring Jess Glynne is the number one hit song.

Barack Obama is currently the President of the United States and the movie Mr. Peabody & Sherman is at the top of the Box Office. In the United Kingdom, David Cameron is the current Prime Minister. A social networking website called Vine is extremely popular at the moment.

It is 2014, so the music charts are being dominated by artists such as Pharrell Williams, Katy Perry, John Legend, Iggy Azalea, Meghan Trainor, Lorde and Jason Derulo. A new Internet slang phrase called "Sliding into your DMs" is becoming popular at the moment. Malaysia Airlines Flight 370 recently disappeared from radar and there has been zero trace of the missing aircraft despite a widespread search.

On TV, people are watching popular shows such as "Prison Break", "The Vampire Diaries", "Game of Thrones" and "House of Cards". Meanwhile, gamers are playing titles such as "BioShock Infinite", "Grand Theft Auto V", "Batman: Arkham Origins" and "Call of Duty: Ghosts". Children and teenagers are currently watching television shows such as "Peppa Pig", "LazyTown", "Phineas and Ferb" and "Team Umizoomi".

Who was the Prime Minister of the United Kingdom on March 20th, 2014?

Enter your date of birth below to find out how old you were on March 20th, 2014.

Looking for some nostalgia? Here are some Youtube videos relating to March 20th, 2014. Please note that videos are automatically selected by Youtube and that results may vary! Click on the "Load Next Video" button to view the next video in the search playlist. In many cases, you'll find episodes of old TV shows, documentaries, music videos and soap dramas.