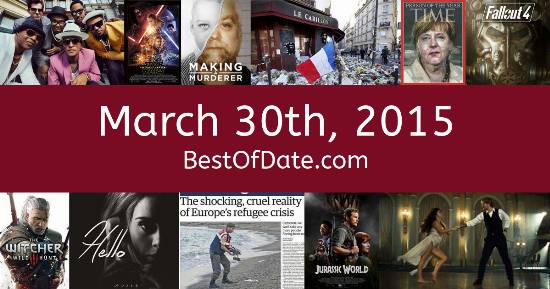 On March 30th, 2015, the following songs were at the top of the music charts in the USA and the UK.

The top "Box Office" movie on this date was the film "Home".

The date is March 30th, 2015, and it's a Monday. Anyone born today will have the star sign Aries. Spring has arrived and the days have become longer.

In America, the song Uptown Funk by Mark Ronson featuring Bruno Mars is on top of the singles charts. Over in the UK, Lay Me Down by Sam Smith featuring John Legend is the number one hit song. Barack Obama is currently the President of the United States, and the movie Home is at the top of the Box Office.

In Ireland, architect Graham Dwyer has been found guilty of the murder of Elaine O'Hara. 150 people have tragically lost their lives after Germanwings Flight 9525 recently crashed into the French Alps. News reports suggest that one of the co-pilots was suicidal and that he deliberately caused the crash. In wrestling, Seth Rollins has just defeated Roman Reigns and Brock Lesnar in a triple threat match at Wrestlemania 31.

Australia have just won the 2015 Cricket World Cup. If you were to travel back to this day, notable figures such as Sawyer Sweeten, Ben E. King, B.B. King and Christopher Lee would all be still alive. On TV, people are watching popular shows such as "Homeland", "Orange Is the New Black", "Peaky Blinders" and "Power".

Meanwhile, gamers are playing titles such as "Minecraft", "Grand Theft Auto V", "Destiny" and "Call of Duty: Advanced Warfare". Kids and teenagers are watching TV shows such as "Phineas and Ferb", "Jessie", "Austin & Ally" and "Nicky, Ricky, Dicky & Dawn". If you're a kid or a teenager, then you're probably playing with toys such as the Furby Boom, the PlayStation 4, the Xbox One and Frozen toys.

These are trending news stories and fads that were prevalent at this time. These are topics that would have been in the media on March 30th, 2015.

Check out our personality summary for people who were born on March 30th, 2015.

Television shows that people were watching in March, 2015.

Popular video games that people were playing in March of 2015.

If you are looking for some childhood nostalgia, then you should check out March 30th, 2021 instead.

Barack Obama was the President of the United States on March 30th, 2015.

Enter your date of birth below to find out how old you were on March 30th, 2015.
This information is not transmitted to our server.