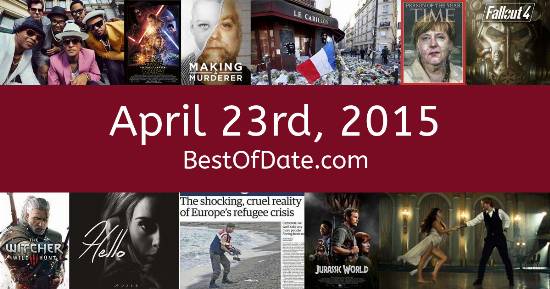 Songs that were on top of the music singles charts in the USA and the United Kingdom on April 23rd, 2015.

The date is April 23rd, 2015 and it's a Thursday. Anyone born today will have the star sign Taurus. The summer of 2015 is drawing closer and temperatures have started to rise.

In America, the song Uptown Funk by Mark Ronson featuring Bruno Mars is on top of the singles charts. Over in the UK, Hold My Hand by Jess Glynne is the number one hit song. Barack Obama is currently the President of the United States and the movie Furious 7 is at the top of the Box Office.

The game Grand Theft Auto V has finally been released for the PC after several delays. In England, soccer fans are reacting to news that Sunderland player Adam Johnson has been officially charged with child grooming and sexual activity with a child under 16. On TV, people are watching popular shows such as "The Walking Dead", "Homeland", "Rick and Morty" and "Power".

Meanwhile, gamers are playing titles such as "Watchdogs", "Call of Duty: Advanced Warfare", "Far Cry 4" and "Battlefield Hardline". Kids and teenagers are watching TV shows such as "The Fairly OddParents", "Jessie", "Doc McStuffins" and "Henry Danger". Popular toys at the moment include the likes of the PlayStation 4 and the Xbox One.

Barack Obama was the President of the United States on April 23rd, 2015.

David Cameron was the Prime Minister of the United Kingdom on April 23rd, 2015.

Enter your date of birth below to find out how old you were on April 23rd, 2015.