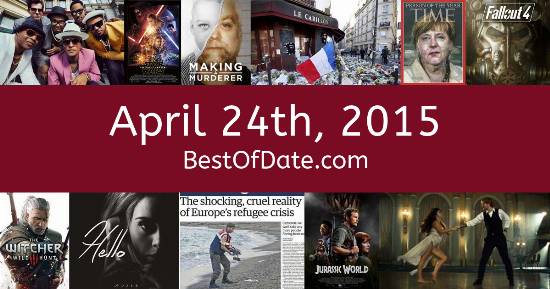 Songs that were on top of the music singles charts in the USA and the United Kingdom on April 24th, 2015.

The date is April 24th, 2015 and it's a Friday. Anyone born today will have the star sign Taurus. Currently, people have "that Friday feeling" and are looking forward to the weekend.

It's 2015, so the music charts are being dominated by the likes of OMI, Bruno Mars, Ellie Goulding, Adele, Justin Bieber and Hozier. The game Grand Theft Auto V has finally been released for the PC after several delays. In England, soccer fans are reacting to news that Sunderland player Adam Johnson has been officially charged with child grooming and sexual activity with a child under 16.

In boxing, the build-up to the highly anticipated fight between Floyd Mayweather and Manny Pacquiao is currently taking place. Caitlyn Jenner has recently come out as a trans woman during a "20/20" interview with Diane Sawyer. On TV, people are watching popular shows such as "The Vampire Diaries", "Community", "Game of Thrones" and "House of Cards".

Meanwhile, gamers are playing titles such as "Watchdogs", "Far Cry 4", "Dying Light" and "Mortal Kombat X". Kids and teenagers are watching TV shows such as "The Fairly OddParents", "Mickey Mouse Clubhouse", "Lab Rats: Bionic Island" and "Girl Meets World". Popular toys at the moment include the likes of the PlayStation 4 and the Xbox One.

Celebrities, historical figures and notable people who were born on the 24th of April.

Barack Obama was the President of the United States on April 24th, 2015.

David Cameron was the Prime Minister of the United Kingdom on April 24th, 2015.

Enter your date of birth below to find out how old you were on April 24th, 2015.