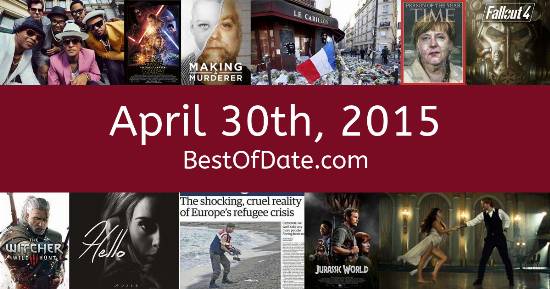 Songs that were on top of the music singles charts in the USA and the United Kingdom on April 30th, 2015.

The date is April 30th, 2015 and it's a Thursday. Anyone born today will have the star sign Taurus. The summer of 2015 is drawing closer and temperatures have started to rise.

The song See You Again by Wiz Khalifa featuring Charlie Puth is on top of the singles charts in both the USA and the United Kingdom. Barack Obama is currently the President of the United States and the movie Furious 7 is at the top of the Box Office. In the United Kingdom, David Cameron is the current Prime Minister.

A social networking website called Vine is extremely popular at the moment. It's 2015, so the music charts are being dominated by the likes of OMI, Bruno Mars, Ellie Goulding, Adele, Justin Bieber and Hozier. The game Grand Theft Auto V has finally been released for the PC after several delays.

In England, soccer fans are reacting to news that Sunderland player Adam Johnson has been officially charged with child grooming and sexual activity with a child under 16. In boxing, the build-up to the highly anticipated fight between Floyd Mayweather and Manny Pacquiao is currently taking place. Caitlyn Jenner has recently come out as a trans woman during a "20/20" interview with Diane Sawyer.

Meanwhile, heavyweight boxing champion Wladimir Klitschko has recently defeated title challenger Bryant Jennings by unanimous decision. In Nepal, a 7.8 magnitude earthquake has tragically caused the deaths of 9,100 people. In the United Kingdom, the campaign for the 2015 general election is underway. David Cameron's Conservative Party are going head-to-head with Ed Miliband and the Labour Party. Opinion polls are showing that the result will be tight and that it could potentially result in a hung parliament.

Tributes are pouring in for soul singer Ben E. King, who has passed away from coronary problems at the age of 76. Radio stations are currently playing the hit song "Stand by Me" in his honor. On TV, people are watching popular shows such as "Prison Break", "RuPaul's Drag Race", "Suits" and "Homeland". Meanwhile, gamers are playing titles such as "Destiny", "Call of Duty: Advanced Warfare", "Assassin's Creed: Unity" and "Far Cry 4".

Children and teenagers are currently watching television shows such as "Dora the Explorer", "Phineas and Ferb", "Austin & Ally" and "Dog with a Blog". If you're a kid or a teenager, then you're probably playing with toys such as the PlayStation 4 and the Xbox One.

Barack Obama was the President of the United States on April 30th, 2015.

David Cameron was the Prime Minister of the United Kingdom on April 30th, 2015.

Enter your date of birth below to find out how old you were on April 30th, 2015.