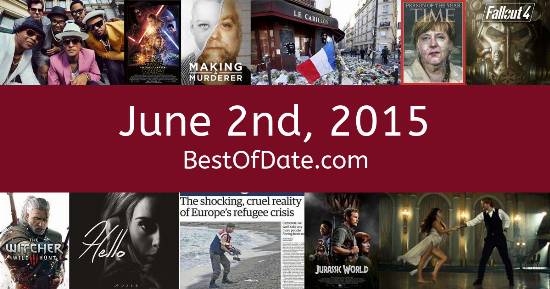 Songs that were on top of the music singles charts in the USA and the United Kingdom on June 2nd, 2015.

The date is June 2nd, 2015 and it's a Tuesday. Anyone born today will have the star sign Gemini. It's summer, so the temperatures are warmer and the evenings are longer than usual.

In America, the song See You Again by Wiz Khalifa featuring Charlie Puth is on top of the singles charts. Over in the UK, Cheerleader by OMI is the number one hit song. Barack Obama is currently the President of the United States and the movie San Andreas is at the top of the Box Office.

In soccer, English side Arsenal have just won the FA Cup after thrashing Aston Villa 4-0. FIFA President Sepp Blatter has resigned amid rumors that he may be investigated for fraud and corruption. On TV, people are watching popular shows such as "Prison Break", "American Horror Story", "House of Cards" and "Orange Is the New Black".

Meanwhile, gamers are playing titles such as "Alien: Isolation", "Assassin's Creed: Unity", "Far Cry 4" and "Mortal Kombat X". Children and teenagers are currently watching television shows such as "Phineas and Ferb", "Austin & Ally", "Dog with a Blog" and "Girl Meets World". Popular toys at the moment include the likes of the PlayStation 4 and the Xbox One.

Barack Obama was the President of the United States on June 2nd, 2015.

David Cameron was the Prime Minister of the United Kingdom on June 2nd, 2015.

Enter your date of birth below to find out how old you were on June 2nd, 2015.

Here are some fun statistics about June 2nd, 2015.