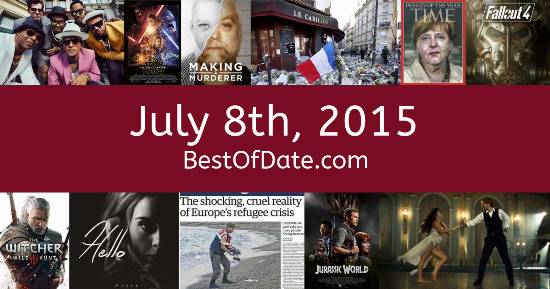 July 8th, 2015 relates to a fictional event in a movie, book, game or television series.

Songs that were on top of the music singles charts in the USA and the United Kingdom on July 8th, 2015.

The date is July 8th, 2015 and it's a Wednesday. Anyone born today will have the star sign Cancer. It's summer, so the temperatures are warmer and the evenings are longer than usual.

In America, the song See You Again by Wiz Khalifa featuring Charlie Puth is on top of the singles charts. Over in the UK, Not Letting Go by Tinie Tempah featuring Jess Glynne is the number one hit song. Barack Obama is currently the President of the United States and the movie Inside Out is at the top of the Box Office.

In celebrity news, Ashton Kutcher and Mila Kunis have tied the knot in Los Angeles. The Greek debt crisis is currently a major topic of conversation after the country votes to reject new bailout conditions proposed by the EU and the IMF. It has now become a possibility that Greece may be forced to exit the EU. Former Westlife singer Brian McFadden and model Vogue Williams have just announced that they are separating.

Pop singer Ariana Grande is currently the focus of controversy after security footage emerges of her licking donuts that were meant for customers and saying "I hate America". On TV, people are watching popular shows such as "Modern Family", "Game of Thrones", "Peaky Blinders" and "Jane the Virgin". Meanwhile, gamers are playing titles such as "Destiny", "Call of Duty: Advanced Warfare", "Far Cry 4" and "Battlefield Hardline".

Kids and teenagers are watching TV shows such as "Dora the Explorer", "Paw Patrol", "Every Witch Way" and "Girl Meets World". If you're a kid or a teenager, then you're probably playing with toys such as the PlayStation 4 and the Xbox One.

Celebrities, historical figures and notable people who were born on the 8th of July.

Barack Obama was the President of the United States on July 8th, 2015.

David Cameron was the Prime Minister of the United Kingdom on July 8th, 2015.

Enter your date of birth below to find out how old you were on July 8th, 2015.

Here are some fun statistics about July 8th, 2015.