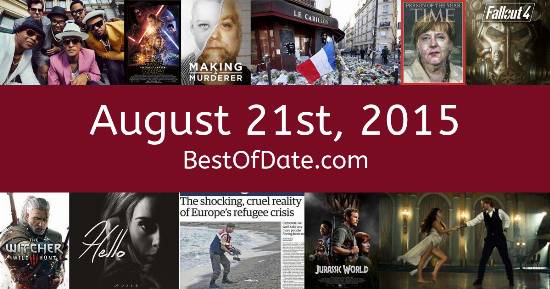 These songs were on top of the music charts in the United States and the United Kingdom on August 21st, 2015.

Play the top singles from the year 2015.
A Spotify playlist of hit songs from 2015. Take a trip back to the peak days of Mark Ronson, Ed Sheeran, Justin Bieber, Major Lazer and Ellie Goulding.

The top "Box Office" movie on this date was the film "Straight Outta Compton".

The date is August 21st, 2015, and it's a Friday. Anyone born today will have the star sign Leo. Currently, people have "that Friday feeling" and are looking forward to the weekend.

The summer of 2015 is coming to an end and fall is just around the corner. In America, the song Cheerleader by OMI is on top of the singles charts. Over in the UK, Marvin Gaye by Charlie Puth featuring Meghan Trainor is the number one hit song.

Barack Obama is currently the President of the United States, and the movie Straight Outta Compton is at the top of the Box Office. In the United Kingdom, David Cameron is the current Prime Minister. A social networking website called Vine is extremely popular at the moment.

It's 2015, so the music charts are being dominated by the likes of OMI, Bruno Mars, Ellie Goulding, Adele, Justin Bieber and Hozier. Rap star Dr. Dre has just released his new album Compton. Following the release of the movie "Straight Outta Compton", people on the Internet are currently sharing parody images that use the name of their own hometown instead of Compton.

Hackers have recently leaked data that they stole from extramarital affairs website Ashley Madison. Actress Megan Fox and 90210 star Brian Austin Green have just announced that they will be separating after five years of marraige. If you were to travel back to this day, notable figures such as Jonah Lomu, Lemmy, David Bowie and Angela Raiola would all be still alive.

Popular toys at the moment include the likes of Rainbow Loom, the Xbox One, Frozen toys and Barbie Saddle n Ride.

These are trending news stories and fads that were prevalent at this time. These are topics that would have been in the media on August 21st, 2015.

News stories and other events that happened around August 21st, 2015.

Check out our personality summary for people who were born on August 21st, 2015.

Television shows that people were watching in August, 2015.

Popular video games that people were playing in August of 2015.

If you are looking for some childhood nostalgia, then you should check out August 21st, 2021 instead.

Barack Obama was the President of the United States on August 21st, 2015.

Find out what your age was on August 21st, 2015, by entering your DOB below.
This information is not saved on our server.