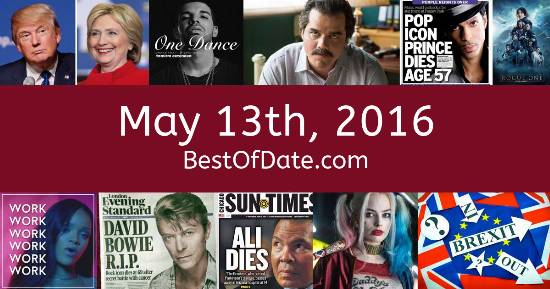 These songs were on top of the music charts in the United States and the United Kingdom on May 13th, 2016.

The movie "Captain America: Civil War" was at the top of the Box Office on this day.

The date is May 13th, 2016, and it's a Friday. Anyone born today will have the star sign Taurus. Currently, people have "that Friday feeling" and are looking forward to the weekend.

The summer of 2016 has finally arrived. The weather has warmed up and the evenings are brighter than usual. In America, the song Panda by Desiigner is on top of the singles charts. Over in the UK, One Dance by Drake is the number one hit song.

Barack Obama is currently the President of the United States, and the movie Captain America: Civil War is at the top of the Box Office. In the United Kingdom, David Cameron is the current Prime Minister. It's 2016, so the music charts are being dominated by artists such as Drake, Lukas Graham, Sia, Mike Posner, The Chainsmokers and Calvin Harris.

In England, underdogs Leicester City have just been crowned as Premier League champions, despite being 5000-to-1 odds at the start of the season. Rodrigo Duterte has become the new President of the Philippines. In Irish politics, Joan Burton has just stepped down as leader of the Labour party following a disastrous performance in the 2016 general election.

If you were to travel back to this day, notable figures such as Muhammad Ali, Kimbo Slice, Christina Grimmie and Fidel Castro would all be still alive. On TV, people are watching popular shows such as "Grey's Anatomy", "The Walking Dead", "Homeland" and "Gotham". Meanwhile, gamers are playing titles such as "Rocket League", "Just Cause 3", "XCOM 2" and "Tom Clancy's The Division".

Kids and teenagers are watching TV shows such as "Dora the Explorer", "Mickey Mouse Clubhouse", "Horrid Henry" and "The Loud House". If you're a kid or a teenager, then you're probably playing with toys such as the PlayStation 4, the Xbox One, Barbie Saddle n Ride and Star Wars BB-8 toy droid.

These are trending news stories and fads that were prevalent at this time. These are topics that would have been in the media on May 13th, 2016.

News stories and other events that happened around May 13th, 2016.

Check out our personality summary for people who were born on May 13th, 2016.

Barack Obama was the President of the United States on May 13th, 2016.

David Cameron was the Prime Minister of the United Kingdom on May 13th, 2016.

Find out what your age was on May 13th, 2016, by entering your DOB below.
This information is not saved on our server.