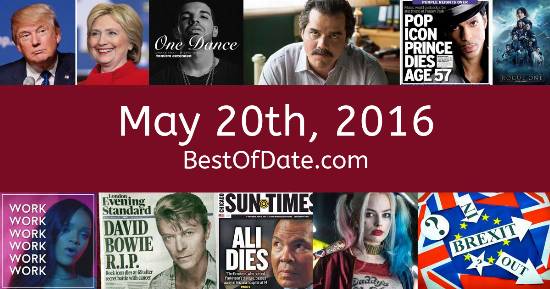 Songs that were on top of the music singles charts in the USA and the United Kingdom on May 20th, 2016.

The date is May 20th, 2016 and it's a Friday. Anyone born today will have the star sign Taurus. Currently, people have "that Friday feeling" and are looking forward to the weekend.

The summer of 2016 has finally arrived. The weather has warmed up and the evenings are brighter than usual. In America, the song Panda by Desiigner is on top of the singles charts. Over in the UK, One Dance by Drake is the number one hit song.

Barack Obama is currently the President of the United States and the movie Captain America: Civil War is at the top of the Box Office. In the United Kingdom, David Cameron is the current Prime Minister. It's 2016, so the music charts are being dominated by artists such as Drake, Lukas Graham, Sia, Mike Posner, The Chainsmokers and Calvin Harris.

On TV, people are watching popular shows such as "Bones", "American Horror Story", "House of Cards" and "Making a Murderer". Meanwhile, gamers are playing titles such as "Overwatch", "XCOM 2", "Tom Clancy's The Division" and "Uncharted 4: A Thief's End". Kids and teenagers are watching TV shows such as "Dora the Explorer", "Sheriff Callie's Wild West", "Henry Danger" and "Nicky, Ricky, Dicky & Dawn".

Notable events that occurred around May 20th, 2016.

Barack Obama was the President of the United States on May 20th, 2016.

David Cameron was the Prime Minister of the United Kingdom on May 20th, 2016.

Leave a comment and tell everyone why May 20th, 2016 is important to you.