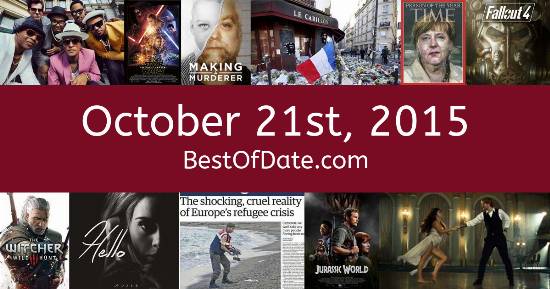 October 21st, 2015 relates to an event in a movie, book, game or television series:

Songs that were on top of the music singles charts in the USA and the United Kingdom on October 21st, 2015:

The date is October 21st, 2015 and it's a Wednesday. Anyone born today will have the star sign Libra. The summer is long gone. Temperatures have started to become much cooler and the evenings are beginning to get darker.

Fallen leaves have carpeted driveways, lawns, pathways and sidewalks and there's a fresh earthy scent in the ear. Halloween of 2015 is quickly approaching and stores are selling costumes and decorations. In America, the song The Hills by The Weeknd is on top of the singles charts.

Over in the UK, What Do You Mean? by Justin Bieber is the number one hit song. Barack Obama is currently the President of the United States and the movie Goosebumps is at the top of the Box Office. In the United Kingdom, David Cameron is the current Prime Minister.

The Internet slang phrase "Netflix and chill" is becoming more and more popular. NBA player Lamar Odom has been placed on life support after suffering kidney failure and several heart attacks due to cocaine use. On TV, people are watching popular shows such as "Bones", "Peaky Blinders", "Rick and Morty" and "Jane the Virgin".

Meanwhile, gamers are playing titles such as "Call of Duty: Advanced Warfare", "Far Cry 4", "Batman: Arkham Knight" and "Rocket League". Kids and teenagers are watching TV shows such as "Every Witch Way", "Girl Meets World", "Henry Danger" and "Nicky, Ricky, Dicky & Dawn". If you're a kid or a teenager, then you're probably playing with toys such as "PlayStation 4", "Xbox One" and "Star Wars BB-8 toy droid".

Celebrities, historical figures and noteable people who were born on the 21st of October:

Who was the Prime Minister of the United Kingdom on October 21st, 2015?

Enter your date of birth below to find out how old you were on October 21st, 2015.

Looking for some nostalgia? Here are some Youtube videos relating to October 21st, 2015. Please note that videos are automatically selected by Youtube and that results may vary! Click on the "Load Next Video" button to view the next video in the search playlist. In many cases, you'll find episodes of old TV shows, documentaries, music videos and soap dramas.

Here are some fun statistics about October 21st, 2015.