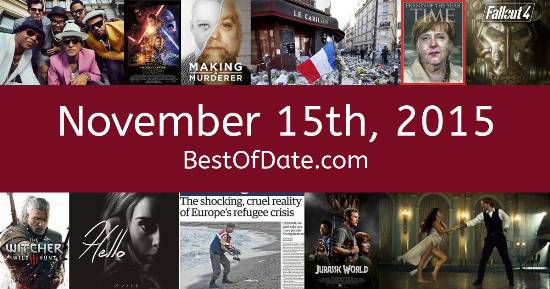 Songs that were on top of the music singles charts in the USA and the United Kingdom on November 15th, 2015.

The date is November 15th, 2015 and it's a Sunday. Anyone born today will have the star sign Scorpio. Currently, people are enjoying their weekend.

It's November, so the evenings are getting darker and the days are getting colder. The song Hello by Adele is on top of the singles charts in both the USA and the United Kingdom. Barack Obama is currently the President of the United States and the movie Spectre is at the top of the Box Office.

Meanwhile, a gesture called "the Dab" is beginning to take off in popularity. Sports stars in particular are starting to incorporate the move into their celebrations. The world is in shock at the events that have recently unfolded in Paris. 130 people have been left dead following a series of coordinated ISIS attacks on the French capital. Vincent Roy Margera, who portrayed the character "Don Vito" in the series Jackass, has passed away from kidney and liver failure at the age of 59.

Celebrities, historical figures and notable people who were born on the 15th of November.

Barack Obama was the President of the United States on November 15th, 2015.

David Cameron was the Prime Minister of the United Kingdom on November 15th, 2015.

Enter your date of birth below to find out how old you were on November 15th, 2015.

Here are some fun statistics about November 15th, 2015.