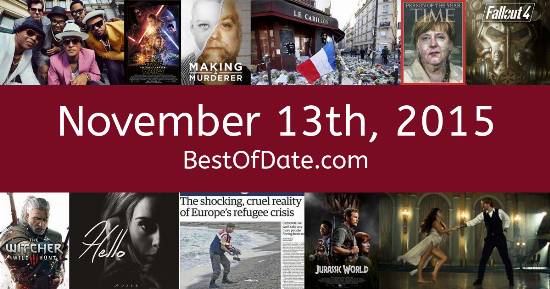 Songs that were on top of the music singles charts in the USA and the United Kingdom on November 13th, 2015.

I'll always remember this day. The Christmas lights were turned on in my hometown and I walked down to see them. At one point, I checked Facebook and saw several statuses about how something bad was happening in Paris. At the time, I didn't realize how serious it was.
Posted on November 19th, 2021 20:51

The date is November 13th, 2015 and it's a Friday. Anyone born today will have the star sign Scorpio. Currently, people have "that Friday feeling" and are looking forward to the weekend.

It's November, so the evenings are getting darker and the days are getting colder. In America, the song The Hills by The Weeknd is on top of the singles charts. Over in the UK, Hello by Adele is the number one hit song.

Barack Obama is currently the President of the United States and the movie Spectre is at the top of the Box Office. In the United Kingdom, David Cameron is the current Prime Minister. It's 2015, so the music charts are being dominated by the likes of OMI, Bruno Mars, Ellie Goulding, Adele, Justin Bieber and Hozier.

The Internet slang phrase "Netflix and chill" is becoming more and more popular. Meanwhile, a gesture called "the Dab" is beginning to take off in popularity. Sports stars in particular are starting to incorporate the move into their celebrations. Soccer star Karim Benzema has been arrested by French police for his alleged part in blackmailing fellow France international player Mathieu Valbuena.

The game "Call of Duty: Black Ops III" has just been released. The world is in shock at the events that have recently unfolded in Paris. 130 people have been left dead following a series of coordinated ISIS attacks on the French capital. If you were to travel back to this day, notable figures such as Jonah Lomu, Lemmy, David Bowie and Angela Raiola would all be still alive.

If you're a kid or a teenager, then you're probably playing with toys such as the Furby Boom, the PlayStation 4, Frozen toys and Star Wars BB-8 toy droid.

Barack Obama was the President of the United States on November 13th, 2015.

David Cameron was the Prime Minister of the United Kingdom on November 13th, 2015.

Enter your date of birth below to find out how old you were on November 13th, 2015.

Here are some fun statistics about November 13th, 2015.