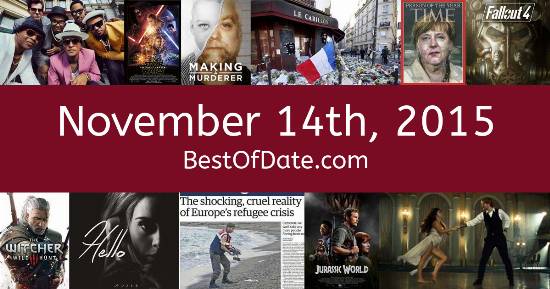 Songs that were on top of the music singles charts in the USA and the United Kingdom on November 14th, 2015:

The date is November 14th, 2015 and it's a Saturday. Anyone born today will have the star sign Scorpio. Currently, people are enjoying their weekend.

It's November, so the evenings are getting darker and the days are getting colder. The song Hello by Adele is on top of the singles charts in both the USA and the United Kingdom. Barack Obama is currently the President of the United States and the movie Spectre is at the top of the Box Office.

Meanwhile, a gesture called "the Dab" is beginning to take off in popularity. Sports stars in particular are starting to incorporate the move into their celebrations. Soccer star Karim Benzema has been arrested by French police for his alleged part in blackmailing fellow France international player Mathieu Valbuena. The game "Call of Duty: Black Ops III" has just been released.

The world is in shock at the events that have recently unfolded in Paris. 130 people have been left dead following a series of coordinated ISIS attacks on the French capital. People are watching popular TV shows such as "The Walking Dead", "House of Cards", "Peaky Blinders" and "Narcos - Season 1". Meanwhile, gamers are playing titles such as "Metal Gear Solid V: The Phantom Pain", "Assassin's Creed Syndicate", "Halo 5: Guardians" and "Fallout 4".

Kids and teenagers are watching TV shows such as "Dora the Explorer", "Mickey Mouse Clubhouse", "Girl Meets World" and "Henry Danger". If you're a kid or a teenager, then you're probably playing with toys such as "PlayStation 4", "Xbox One" and "Star Wars BB-8 toy droid".

Celebrities, historical figures and noteable people that were born on the 14th of November:

Who was the Prime Minister of the United Kingdom on November 14th, 2015?

Enter your date of birth below to find out how old you were on November 14th, 2015.

Looking for some nostalgia? Here are some Youtube videos relating to November 14th, 2015. Please note that videos are automatically selected by Youtube and that results may vary! Click on the "Load Next Video" button to view the next video in the search playlist. In many cases, you'll find episodes of old TV shows, documentaries, music videos and soap dramas.

Here are some fun statistics about November 14th, 2015.