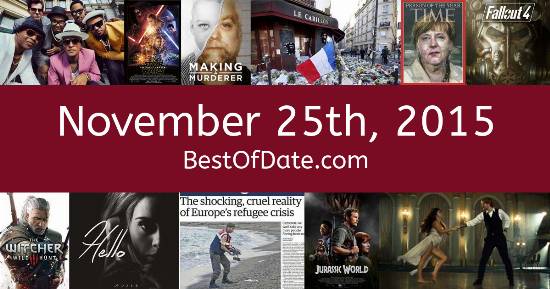 Songs that were on top of the music singles charts in the USA and the United Kingdom on November 25th, 2015.

The date is November 25th, 2015 and it's a Wednesday. Anyone born today will have the star sign Sagittarius. In America, it is the day before Thanksgiven Day and people are looking forward to tomorrow's dinner.

It's November, so the evenings are getting darker and the days are getting colder. The song Hello by Adele is on top of the singles charts in both the USA and the United Kingdom. Barack Obama is currently the President of the United States and the movie The Hunger Games: Mockingjay - Part 2 is at the top of the Box Office.

Meanwhile, a gesture called "the Dab" is beginning to take off in popularity. Sports stars in particular are starting to incorporate the move into their celebrations. Tensions are currently simmering in the Middle East following Turkey's decision to shoot down a Russian military jet at the border between Turkey and Syria. If you were to travel back to this day, notable figures such as Lemmy, David Bowie, Angela Raiola and Rob Ford would all be still alive.

On TV, people are watching popular shows such as "Prison Break", "Once Upon a Time", "Black-ish" and "Better Call Saul". Meanwhile, gamers are playing titles such as "Minecraft", "Grand Theft Auto V", "Battlefield Hardline" and "Mortal Kombat X". Kids and teenagers are watching TV shows such as "Dora the Explorer", "Doc McStuffins", "Agents of S.H.I.E.L.D." and "Nicky, Ricky, Dicky & Dawn".

Popular toys at the moment include the likes of Rainbow Loom, the Furby Boom, Frozen toys and Barbie Saddle n Ride.

Barack Obama was the President of the United States on November 25th, 2015.

David Cameron was the Prime Minister of the United Kingdom on November 25th, 2015.

Enter your date of birth below to find out how old you were on November 25th, 2015.

Here are some fun statistics about November 25th, 2015.