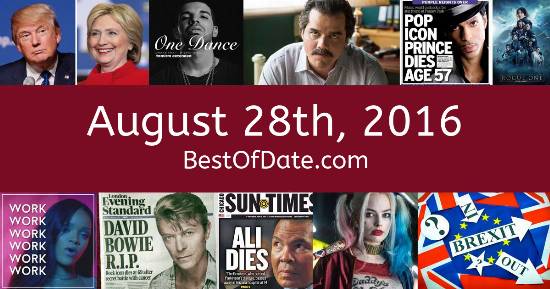 Songs that were on top of the music singles charts in the USA and the United Kingdom on August 28th, 2016.

The date is August 28th, 2016 and it's a Sunday. Anyone born today will have the star sign Virgo. Currently, people are enjoying their weekend.

The summer of 2016 is coming to an end and fall is just around the corner. In America, the song Cheap Thrills by Sia is on top of the singles charts. Over in the UK, Cold Water by Major Lazer featuring Justin Bieber is the number one hit song.

Barack Obama is currently the President of the United States and the movie Don't Breathe is at the top of the Box Office. In the United Kingdom, Theresa May is the current Prime Minister. It's 2016, so the music charts are being dominated by artists such as Drake, Lukas Graham, Sia, Mike Posner, The Chainsmokers and Calvin Harris.

A meme called "Arthur's Fist" is currently going viral on the Internet. The reaction image, which is used to highlight infuriating situations, features Arthur from the TV series holding a clinched fist. The 2016 United States presidential election is in full swing, with Hillary Clinton facing off against Donald Trump. If you were to travel back to this day, notable figures such as Fidel Castro, Big Syke, George Michael and Carrie Fisher would all be still alive.

On TV, people are watching popular shows such as "Grey's Anatomy", "Game of Thrones", "Black Mirror" and "Making a Murderer". Meanwhile, gamers are playing titles such as "Batman: Arkham Knight", "Call of Duty: Black Ops III", "Overwatch" and "Tom Clancy's The Division". Kids and teenagers are watching TV shows such as "Dora the Explorer", "The Fairly OddParents", "Jake and the Never Land Pirates" and "Sheriff Callie's Wild West".

Popular toys at the moment include the likes of the Xbox One, Barbie Saddle n Ride, Star Wars BB-8 toy droid and L.O.L. Surprise!.

Belgian soccer player. Deceased
Born on August 28th, 1994
He was not alive on this date.

Barack Obama was the President of the United States on August 28th, 2016.

Theresa May was the Prime Minister of the United Kingdom on August 28th, 2016.

Enter your date of birth below to find out how old you were on August 28th, 2016.