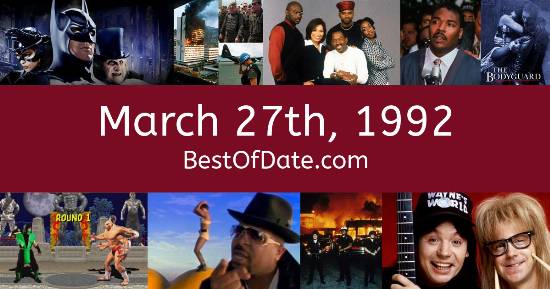 On March 27th, 1992, the following songs were at the top of the music charts in the USA and the UK.

The date is March 27th, 1992, and it's a Friday. Anyone born today will have the star sign Aries. Currently, people have "that Friday feeling" and are looking forward to the weekend.

Spring has arrived and the days have become longer. In America, the song Save The Best For The Last by Vanessa Williams is on top of the singles charts. Over in the UK, Stay by Shakespears Sisters is the number one hit song.

The trial of four police officers for the 1991 beating of Rodney King back is currently taking in Simi Valley, California. In the United Kingdom, the campaign for the 1992 general election is underway. Prime Minister John Major and the Conservative Party are hoping to retain power. However, recent polls have been consistently favoring the Labour Party, who are being led by Neil Kinnock. Pakistan have just won the 1992 Cricket World Cup after beating England in the final.

Boxer Mike Tyson has just been sentenced to six years in prison for the rape of 18-year-old Desiree Washington in Indiana. The comedy film "White Men Can't Jump", starring Woody Harrelson and Wesley Snipes, has been released in movie theaters. If you were to travel back to this day, notable figures such as Robert Reed, Anthony Perkins, Audrey Hepburn and Thurgood Marshall would all be still alive.

On TV, people are watching popular shows such as "Murder, She Wrote", "The Golden Girls", "Matlock" and "The Wonder Years". Meanwhile, gamers are playing titles such as "Paperboy", "Battletoads", "Sonic the Hedgehog" and "Super Castlevania IV". Children and teenagers are currently watching television shows such as "Mister Rogers' Neighborhood", "Saved by the Bell", "The Adventures of Pete & Pete" and "Doug".

If you're a kid or a teenager, then you're probably playing with toys such as My Little Pony (figures), Micro Machines, Koosh Ball and Polly Pocket.

These are trending news stories and fads that were prevalent at this time. These are topics that would have been in the media on March 27th, 1992.

News stories, pop culture trends, and other events that happened around March 27th, 1992.

Check out our personality summary for people who were born on March 27th, 1992.

If you are looking for some childhood nostalgia, then you should check out March 27th, 1998, instead.

Celebrities, historical figures, and other notable people who were born on March 27th.

Find out what your age was on March 27th, 1992, by entering your DOB below.
This information is not saved on our server.