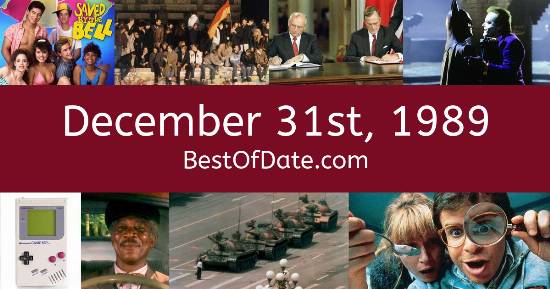 December 31st, 1989 relates to an event in a movie, book, game or television series:

Songs that were on top of the music singles charts in the USA and the United Kingdom on December 31st, 1989:

The date is December 31st, 1989 and it's a Sunday. Anyone born today will have the star sign Capricorn. Currently, people are enjoying their weekend.

It's News Years Eve and everyone is looking forward to what the year 1990 will bring them. The start of a new decade has everyone excited. In America, the song Another Day In Paradise by Phil Collins is on top of the singles charts.

Over in the UK, Do They Know It's Christmas by Band Aid II is the number one hit song. George W. Bush Snr. is currently the President of the United States and the movie The War of the Roses is at the top of the Box Office. In the United Kingdom, Margaret Thatcher is the current Prime Minister.

On TV, people are watching popular shows such as "Charles in Charge", "21 Jump Street", "Seinfeld" and "Saved by the Bell". Meanwhile, gamers are playing titles such as "Duck Hunt", "Maniac Mansion ", "Super Mario Land" and "Batman: The Video Game". Children and teenagers are currently watching television shows such as "Mister Rogers' Neighborhood", "Muppet Babies", "Count Duckula" and "The Simpsons".

If you're a kid or a teenager, then you're probably playing with toys such as "Speak & Spell", "Cabbage Patch Kids", "My Little Pony (figures)" and "Pound Puppies".

Celebrities, historical figures and noteable people who were born on the 31st of December:

National holidays and famous events that fall on the 31st of December:

Who was the Prime Minister of the United Kingdom on December 31st, 1989?

Enter your date of birth below to find out how old you were on December 31st, 1989.

Looking for some nostalgia? Here are some Youtube videos relating to December 31st, 1989. Please note that videos are automatically selected by Youtube and that results may vary! Click on the "Load Next Video" button to view the next video in the search playlist. In many cases, you'll find episodes of old TV shows, documentaries, music videos and soap dramas.

Here are some fun statistics about December 31st, 1989.