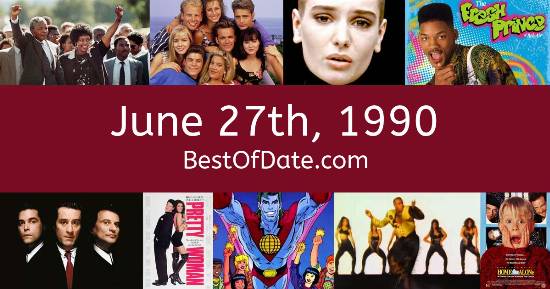 On June 27th, 1990, the following songs were at the top of the music charts in the USA and the UK.

The date is June 27th, 1990, and it's a Wednesday. Anyone born today will have the star sign Cancer. It's summer, so the temperatures are warmer and the evenings are longer than usual.

In America, the song Step By Step by New Kids on the Block is on top of the singles charts. Over in the UK, Sacrifice / Healing Hands by Elton John is the number one hit song. George W. Bush Snr. is currently the President of the United States, and the movie Dick Tracy is at the top of the Box Office.

It's 1990, so the airwaves are being dominated by music artists such as Sinéad O'Connor, Paula Abdul, Janet Jackson, Vanilla Ice, Mariah Carey, Stevie B, Madonna and MC Hammer. In Italy, the 1990 FIFA World Cup is currently taking place. The films "Gremlins 2" and "RoboCop 2" are currently being shown in movie theaters.

Kathleen Young and Irene Templeton have just been ordained as the first female Anglican priests in the United Kingdom. If you were to travel back to this day, notable figures such as Stevie Ray Vaughan, Roald Dahl, John Bardeen and Miles Davis would all be still alive. On TV, people are watching popular shows such as "Columbo", "Dallas", "Sherlock Holmes" and "Murder, She Wrote".

Meanwhile, gamers are playing titles such as "Paperboy", "Herzog Zwei", "Batman: The Video Game" and "Super Mario World". Children and teenagers are currently watching television shows such as "Alvin and the Chipmunks", "Fireman Sam", "The Simpsons" and "Round the Twist". If you're a kid or a teenager, then you're probably playing with toys such as the Easy-Bake Oven, Cabbage Patch Kids, Screwball Scramble and Jenga.

These are trending news stories and fads that were prevalent at this time. These are topics that would have been in the media on June 27th, 1990.

News stories and other events that happened around June 27th, 1990.

Check out our personality summary for people who were born on June 27th, 1990.

If you are looking for some childhood nostalgia, then you should check out June 27th, 1996 instead.

Margaret Thatcher was the Prime Minister of the United Kingdom on June 27th, 1990.

Find out what your age was on June 27th, 1990, by entering your DOB below.
This information is not saved on our server.