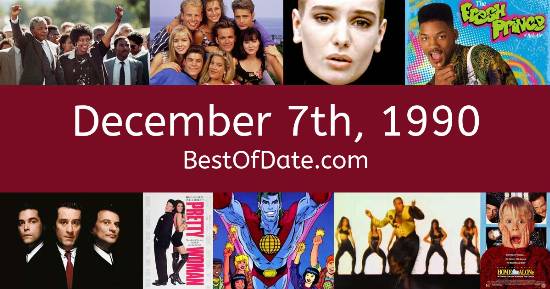 Songs that were on top of the music singles charts in the USA and the United Kingdom on December 7th, 1990.

The date is December 7th, 1990 and it's a Friday. Anyone born today will have the star sign Sagittarius. Currently, people have "that Friday feeling" and are looking forward to the weekend.

The Christmas season of 1990 has began. In America, the song Because I Love You by Stevie B is on top of the singles charts. Over in the UK, Ice Ice Baby by Vanilla Ice is the number one hit song.

George W. Bush Snr. is currently the President of the United States and the movie Child's Play 2 is at the top of the Box Office. In the United Kingdom, John Major is the current Prime Minister. Texting is not a thing yet. Instead, people are using landline phones and pagers. Furthermore, the vast majority of people still have no idea what "the Internet" is.

In Europe, the Soviet Union is continuing to dissolve. Iraqi forces are continuing to occupy Kuwait following an invasion at the start of August. The UN Security Council has given Iraq a deadline to withdraw from the country by the 15th of January. If Iraqi forces fail to withdraw on time, "all necessary means" will be used to push them out. MTV has banned Madonna's music video for "Justify My Love" after executives deemed it to be too explicit. In response, Madonna has appeared on Nightline to defend the video.

The fantasy romance film "Edward Scissorhands", starring Johnny Depp and Winona Ryder, is currently being shown in movie theaters. If you were to travel back to this day, notable figures such as John Bardeen, Miles Davis and Freddie Mercury would all be still alive. On TV, people are watching popular shows such as "Columbo", "Last of the Summer Wine", "The Golden Girls" and "Matlock".

Meanwhile, gamers are playing titles such as "Duck Hunt", "Paperboy", "SimCity" and "World Cup Italia '90". Children and teenagers are currently watching television shows such as "Mister Rogers' Neighborhood", "Muppet Babies", "The Cosby Show" and "TaleSpin". If you're a kid or a teenager, then you're probably playing with toys such as Cabbage Patch Kids, My Little Pony (figures), Pogo ball / Lolo ball and Yo-yo.

If you are looking for some childhood nostalgia, then check out December 7th, 1996 instead.

George W. Bush Snr. was the President of the United States on December 7th, 1990.

John Major was the Prime Minister of the United Kingdom on December 7th, 1990.

Have something to say about December 7th, 1990?

Enter your date of birth below to find out how old you were on December 7th, 1990.

Here are some fun statistics about December 7th, 1990.