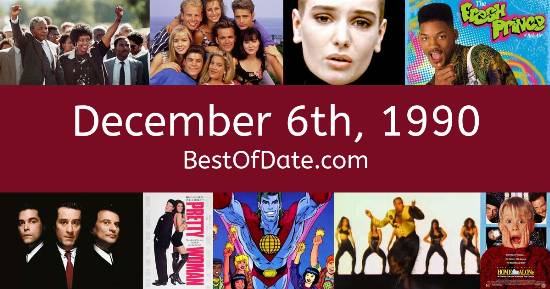 These songs were on top of the music charts in the United States and the United Kingdom on December 6th, 1990.

The date is December 6th, 1990, and it's a Thursday. Anyone born today will have the star sign Sagittarius. The Christmas season of 1990 has began.

It's 1990, so the airwaves are being dominated by music artists such as Sinéad O'Connor, Paula Abdul, Janet Jackson, Vanilla Ice, Mariah Carey, Stevie B, Madonna and MC Hammer. A civil war has broken out in the African nation of Rwanda. In Europe, the Soviet Union is continuing to dissolve.

Iraqi forces are continuing to occupy Kuwait following an invasion at the start of August. The UN Security Council has given Iraq a deadline to withdraw from the country by the 15th of January. If Iraqi forces fail to withdraw on time, "all necessary means" will be used to push them out. Workers on the "Channel Tunnel" between France and the UK have just met each other underneath the seabed of the English Channel. MTV has banned Madonna's music video for "Justify My Love" after executives deemed it to be too explicit. In response, Madonna has appeared on Nightline to defend the video.

If you were to travel back to this day, notable figures such as John Bardeen, Miles Davis and Freddie Mercury would all be still alive. On TV, people are watching popular shows such as "Magnum, P.I.", "MacGyver", "21 Jump Street" and "Full House". Meanwhile, gamers are playing titles such as "SimCity", "DuckTales", "Castlevania III: Dracula's Curse" and "World Cup Italia '90".

Kids and teenagers are watching TV shows such as "The Smurfs", "Noozles", "Nellie the Elephant" and "Beverly Hills, 90210". Popular toys at the moment include the likes of Cabbage Patch Kids, Boglins (hand puppets), Teenage Mutant Hero Turtles figures and Polly Pocket.

These are trending news stories and fads that were prevalent at this time. These are topics that would have been in the media on December 6th, 1990.

Check out our personality summary for people who were born on December 6th, 1990.

If you are looking for some childhood nostalgia, then you should check out December 6th, 1996 instead.

NBA player.
Born on December 6th, 1994
He was born exactly 4 years after this date.

George W. Bush Snr. was the President of the United States on December 6th, 1990.

John Major was the Prime Minister of the United Kingdom on December 6th, 1990.

Enter your date of birth below to find out how old you were on December 6th, 1990.
This information is not transmitted to our server.

Here are some fun statistics about December 6th, 1990.