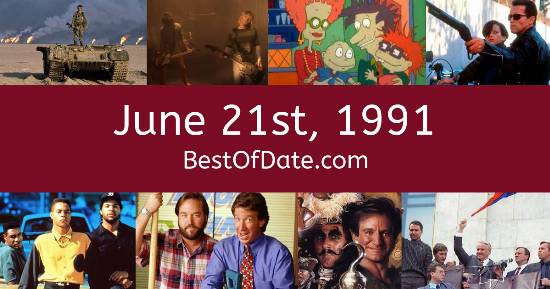 These songs were on top of the music charts in the United States and the United Kingdom on June 21st, 1991.

The date is June 21st, 1991, and it's a Friday. Anyone born today will have the star sign Cancer. Currently, people have "that Friday feeling" and are looking forward to the weekend.

In Europe, the Soviet Union is continuing to dissolve. Meanwhile, in South Africa, the policy of apartheid has officially been ended. In the Philippines, over 800 people have been killed following the recent eruption of Mount Pinatubo.

The body of former U.S. President Zachary Taylor has been exhumed in an effort to discover whether or not his death was caused by arsenic poisoning. Singer Bryan Adams has just released his new song "(Everything I Do) I Do It for You". If you were to travel back to this day, notable figures such as Miles Davis, Freddie Mercury, Robert Reed and Anthony Perkins would all be still alive.

On TV, people are watching popular shows such as "Cheers", "Night Court", "Murder, She Wrote" and "Matlock". Meanwhile, gamers are playing titles such as "SimCity", "Wing Commander", "Railroad Tycoon" and "Castle of Illusion Starring Mickey Mouse". Children and teenagers are currently watching television shows such as "Danger Mouse", "Growing Pains", "Dink, the Little Dinosaur" and "The Adventures of Pete & Pete".

If you're a kid or a teenager, then you're probably playing with toys such as the Nintendo Entertainment System, Teenage Mutant Hero Turtles figures, Lego Pirates and G.I. Joe (figures).

These are trending news stories and fads that were prevalent at this time. These are topics that would have been in the media on June 21st, 1991.

News stories and other events that happened around June 21st, 1991.

Check out our personality summary for people who were born on June 21st, 1991.

If you are looking for some childhood nostalgia, then you should check out June 21st, 1997 instead.

Find out what your age was on June 21st, 1991, by entering your DOB below.
This information is not saved on our server.