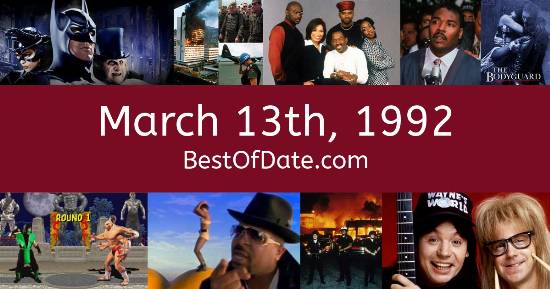 Songs that were on top of the music singles charts in the USA and the United Kingdom on March 13th, 1992.

The date is March 13th, 1992 and it's a Friday. Anyone born today will have the star sign Pisces. Currently, people have "that Friday feeling" and are looking forward to the weekend.

George W. Bush Snr. is currently the President of the United States and the movie Wayne's World is at the top of the Box Office. In the United Kingdom, John Major is the current Prime Minister. In fashion, many of the trends from the late 80s are still popular. Colored tights, denim overalls, leotards, flannel shirts and shoulder pads are all fashionable at the moment.

A new sci-fi film called "The Lawnmower Man" has just been released in movie theaters. The trial of four police officers for the 1991 beating of Rodney King back is currently taking in Simi Valley, California. In the United Kingdom, Prime Minister and Conservative Party leader John Major has just called a general election for the 9th of April. This will be Major's first election at the helm since he took over from Margaret Thatcher.

On TV, people are watching popular shows such as "Cheers", "'Allo 'Allo!", "Married... with Children" and "Seinfeld". Meanwhile, gamers are playing titles such as "Duck Hunt", "Sonic the Hedgehog", "Civilization" and "Street Fighter II: The World Warrior". Children and teenagers are currently watching television shows such as "Teenage Mutant Ninja Turtles", "Rugrats", "Doug" and "The Adventures of Tintin".

If you're a kid or a teenager, then you're probably playing with toys such as My Little Pony (figures), Polly Pocket, Super Soaker (water gun) and Pogs.

Celebrities, historical figures and notable people who were born on the 13th of March.

John Major was the Prime Minister of the United Kingdom on March 13th, 1992.

Enter your date of birth below to find out how old you were on March 13th, 1992.

Leave a comment and tell everyone why March 13th, 1992 is important to you.