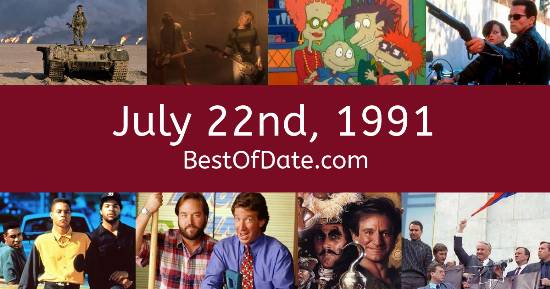 Songs that were on top of the music singles charts in the USA and the United Kingdom on July 22nd, 1991.

The date is July 22nd, 1991 and it's a Monday. Anyone born today will have the star sign Cancer. It's summer, so the temperatures are warmer and the evenings are longer than usual.

The song (Everything I Do) I Do It For You by Bryan Adams is on top of the singles charts in both the USA and the United Kingdom. George W. Bush Snr. is currently the President of the United States and the movie Naked Gun 2 1/2 is at the top of the Box Office. In the United Kingdom, John Major is the current Prime Minister.

English band Right Said Fred have released their new single "I'm Too Sexy". In Europe, the Soviet Union is continuing to dissolve as Ukraine celebrates its first independence day. In California, a search is underway for 12-year-old Jared Negrete, who went missing while he was on a camping trip with the Boy Scouts.

Boxer Mike Tyson has just been arrested on suspicion of raping Miss Black America contestant Desiree Washington. Meanwhile, in Milwaukee, a suspected serial killer called Jeffrey Dahmer has just been arrested after human remains were found in his apartment. On TV, people are watching popular shows such as "Magnum, P.I.", "The Cosby Show", "Married... with Children" and "Saved by the Bell". Meanwhile, gamers are playing titles such as "SimCity", "Phantasy Star II", "Railroad Tycoon" and "Sonic the Hedgehog".

Children and teenagers are currently watching television shows such as "Danger Mouse", "The Cosby Show", "The Real Ghostbusters" and "Doogie Howser, M.D.". If you're a kid or a teenager, then you're probably playing with toys such as the Easy-Bake Oven, the Ghostbusters Proton Pack, the Sega Genesis / Mega Drive and G.I. Joe (figures).

If you are looking for some childhood nostalgia, then check out July 22nd, 1997 instead.

Actress / Singer.
Born on July 22nd, 1992
She was born exactly one year after this date.

John Major was the Prime Minister of the United Kingdom on July 22nd, 1991.