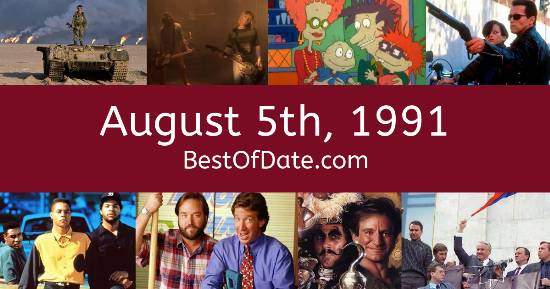 Songs that were on top of the music singles charts in the USA and the United Kingdom on August 5th, 1991.

The date is August 5th, 1991, and it's a Monday. Anyone born today will have the star sign Leo. It's summer, so the temperatures are warmer and the evenings are longer than usual.

The song (Everything I Do) I Do It For You by Bryan Adams is on top of the singles charts in both the USA and the United Kingdom. George W. Bush Snr. is currently the President of the United States, and the movie Terminator 2 is at the top of the Box Office. In the United Kingdom, John Major is the current Prime Minister.

It's 1991, so the airwaves are being dominated by artists such as Bryan Adams, Michael Jackson, Roxette, R.E.M., Color Me Badd and Paula Abdul. In Europe, the Soviet Union is continuing to dissolve. A photograph of pregnant actress Demi Moore posing naked on the cover of Vanity Fair is currently receiving a lot of attention from the media.

A rock subgenre called "Grunge" is starting to rise in popularity. A new comedy film called "Hot Shots!" has just been released in movie theaters. Meanwhile, SEGA have released their new fighting game "Streets of Rage". If you were to travel back to this day, notable figures such as Miles Davis, Freddie Mercury, Robert Reed and Anthony Perkins would all be still alive.

On TV, people are watching popular shows such as "Magnum, P.I.", "Cheers", "The Cosby Show" and "Full House". Meanwhile, gamers are playing titles such as "Paperboy", "SimCity", "The Simpsons: Bart vs. the Space Mutants" and "Battletoads". Kids and teenagers are watching TV shows such as "Alvin and the Chipmunks", "Growing Pains", "The Wonder Years" and "Blossom".

If you're a kid or a teenager, then you're probably playing with toys such as Mr Frosty, Micro Machines, Lego Pirates and Yo-yo.

These are trending news stories and fads that were prevalent at this time. These are topics that would have been in the media on August 5th, 1991.

News stories and other events that happened around August 5th, 1991.

Check out our personality summary for people who were born on August 5th, 1991.

Television shows that people were watching in August, 1991.

Popular video games that people were playing in August of 1991.

If you are looking for some childhood nostalgia, then you should check out August 5th, 1997 instead.

George W. Bush Snr. was the President of the United States on August 5th, 1991.

John Major was the Prime Minister of the United Kingdom on August 5th, 1991.

Find out what your age was on August 5th, 1991, by entering your DOB below.
This information is not saved on our server.

Here are some fun statistics about August 5th, 1991.