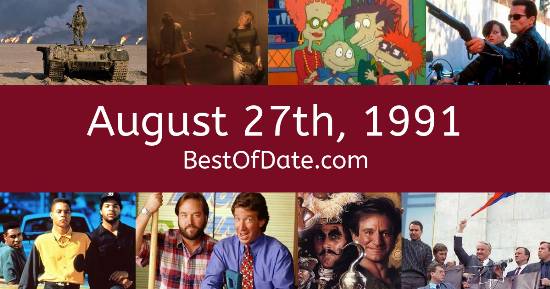 On August 27th, 1991, the following songs were at the top of the music charts in the USA and the UK.

The top "Box Office" movie on this date was the film "Hot Shots!".

The date is August 27th, 1991, and it's a Tuesday. Anyone born today will have the star sign Virgo. The summer of 1991 is coming to an end and fall is just around the corner.

The song (Everything I Do) I Do It For You by Bryan Adams is on top of the singles charts in both the USA and the United Kingdom. George W. Bush Snr. is currently the President of the United States, and the movie Hot Shots! is at the top of the Box Office. In the United Kingdom, John Major is the current Prime Minister.

In Europe, the Soviet Union is continuing to dissolve. Russia has restored the white, blue and red tricolour as its national flag. A recent coup attempt against Mikhail Gorbachev by Soviet hardliners has failed. The leaders of the coup have all been arrested in Moscow. Meanwhile, Ukraine, Estonia and Latvia have all recently declared their independence from the USSR. In sports news, a new Formula One driver called Michael Schumacher has recently made his debut for the Jordan-Ford team. A new rock band called "Pearl Jam" have just released their debut album "Ten".

Rap star Dr. Dre has been sentenced to 24 months probation after pleading no contest to charges that he assaulted a woman at a nightclub in Hollywood. If you were to travel back to this day, notable figures such as Miles Davis, Freddie Mercury, Robert Reed and Anthony Perkins would all be still alive. On TV, people are watching popular shows such as "Last of the Summer Wine", "Cheers", "The Golden Girls" and "MacGyver".

Meanwhile, gamers are playing titles such as "Paperboy", "SimCity", "Sonic the Hedgehog" and "Streets of Rage". Kids and teenagers are watching TV shows such as "Garfield and Friends", "Art Attack", "Rugrats" and "Doug". If you're a kid or a teenager, then you're probably playing with toys such as Screwball Scramble, Teenage Mutant Hero Turtles figures, the Sega Genesis / Mega Drive and the Super Nintendo Entertainment System (SNES).

These are trending news stories and fads that were prevalent at this time. These are topics that would have been in the media on August 27th, 1991.

News stories, pop culture trends, and other events that happened around August 27th, 1991.

Check out our personality summary for people who were born on August 27th, 1991.

Television shows that people were watching in August, 1991.

Popular video games that people were playing in August of 1991.

If you are looking for some childhood nostalgia, then you should check out August 27th, 1997, instead.

Celebrities, historical figures, and other notable people who were born on August 27th.

George W. Bush Snr. was the President of the United States on August 27th, 1991.

Find out what your age was on August 27th, 1991, by entering your DOB below.
This information is not saved on our server.