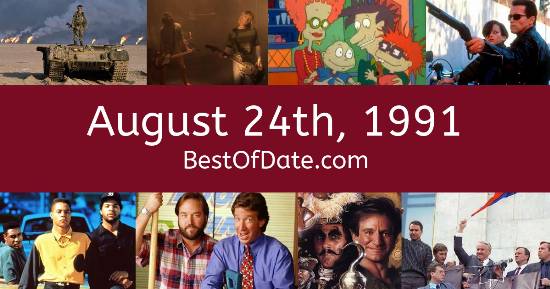 Songs that were on top of the music singles charts in the USA and the United Kingdom on August 24th, 1991.

The date is August 24th, 1991 and it's a Saturday. Anyone born today will have the star sign Virgo. Currently, people are enjoying their weekend.

The summer of 1991 is coming to an end and fall is just around the corner. The song (Everything I Do) I Do It For You by Bryan Adams is on top of the singles charts in both the USA and the United Kingdom. George W. Bush Snr. is currently the President of the United States and the movie Hot Shots! is at the top of the Box Office.

A new cartoon series called "Rugrats" has just been aired on Nickelodeon for the first time. Meanwhile, another cartoon called "The Ren & Stimpy Show" has also been broadcast on the network for the first time. Heavy metal band Metallica have just released their self-titled album "Metallica". Australia is currently in shock after taxi driver Wade Frankum kills seven people in a shooting spree in Sydney, Australia.

In the United States, North Carolina and New England are recovering in the aftermath of "Hurricane Bob", which has caused 1.5 USD billion in damage and left 17 people dead. In Europe, the Soviet Union is continuing to dissolve. Russia has restored the white, blue and red tricolour as its national flag. A recent coup attempt against Mikhail Gorbachev by Soviet hardliners has failed. The leaders of the coup have all been arrested in Moscow. Meanwhile, Ukraine, Estonia and Latvia have all recently declared their independence from the USSR. On TV, people are watching popular shows such as "Sherlock Holmes", "Family Matters", "One Foot in the Grave" and "Blossom".

Meanwhile, gamers are playing titles such as "SimCity", "Railroad Tycoon", "Battletoads" and "Streets of Rage". Children and teenagers are currently watching television shows such as "Full House", "Rosie and Jim", "Clarissa Explains It All" and "Rugrats". If you're a kid or a teenager, then you're probably playing with toys such as Micro Machines, Teenage Mutant Hero Turtles figures, G.I. Joe (figures) and the Super Nintendo Entertainment System (SNES).

If you are looking for some childhood nostalgia, then check out August 24th, 1997 instead.

George W. Bush Snr. was the President of the United States on August 24th, 1991.

John Major was the Prime Minister of the United Kingdom on August 24th, 1991.

Enter your date of birth below to find out how old you were on August 24th, 1991.