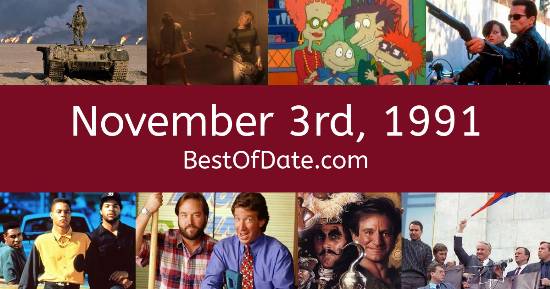 Songs that were on top of the music singles charts in the USA and the United Kingdom on November 3rd, 1991.

The movie "The People Under the Stairs" was at the top of the Box Office on November 3rd, 1991.

The date is November 3rd, 1991, and it's a Sunday. Anyone born today will have the star sign Scorpio. Currently, people are enjoying their weekend.

Halloween has just come and passed. It's November, so the evenings are getting darker and the days are getting colder. In America, the song Romantic by Karyn White is on top of the singles charts.

Over in the UK, The Fly by U2 is the number one hit song. George W. Bush Snr. is currently the President of the United States, and the movie The People Under the Stairs is at the top of the Box Office. In the United Kingdom, John Major is the current Prime Minister.

The country of Poland has just held its first free elections since 1928. In baseball, the Minnesota Twins have just won the 1991 World Series after defeating the Atlanta Braves four games to three. A powerful storm is currently hitting the United States. In the Upper Midwest, the storm is causing heavy snowfall.

If you were to travel back to this day, notable figures such as Freddie Mercury, Robert Reed and Anthony Perkins would all be still alive. On TV, people are watching popular shows such as "'Allo 'Allo!", "Roseanne", "Quantum Leap" and "Home Improvement". Meanwhile, gamers are playing titles such as "The Simpsons: Bart vs. the Space Mutants", "Battletoads", "Sonic the Hedgehog" and "F-16 Combat Pilot".

Children and teenagers are currently watching television shows such as "The Cosby Show", "Taz-Mania", "Darkwing Duck" and "The Adventures of Tintin". Popular toys at the moment include the likes of the Easy-Bake Oven, My Little Pony (figures), the Game Boy and Polly Pocket.

These are trending news stories and fads that were prevalent at this time. These are topics that would have been in the media on November 3rd, 1991.

News stories and other events that happened around November 3rd, 1991.

Check out our personality summary for people who were born on November 3rd, 1991.

If you are looking for some childhood nostalgia, then you should check out November 3rd, 1997 instead.

Model / socialite.
Born on November 3rd, 1995
She was born exactly 4 years after this date.

George W. Bush Snr. was the President of the United States on November 3rd, 1991.

John Major was the Prime Minister of the United Kingdom on November 3rd, 1991.

Find out what your age was on November 3rd, 1991, by entering your DOB below.
This information is not saved on our server.

Here are some fun statistics about November 3rd, 1991.