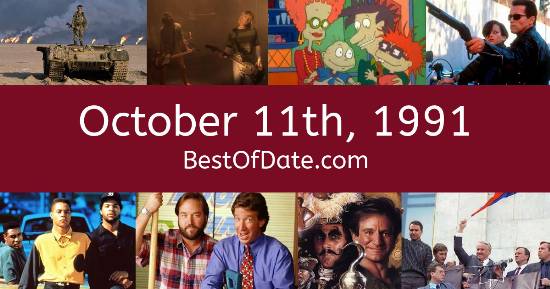 Songs that were on top of the music singles charts in the USA and the United Kingdom on October 11th, 1991:

The date is October 11th, 1991 and it's a Friday. Anyone born today will have the star sign Libra. Currently, people have "that Friday feeling" and are looking forward to the weekend.

The summer is long gone. Temperatures have started to become much cooler and the evenings are beginning to get darker. Fallen leaves have carpeted driveways, lawns, pathways and sidewalks and there's a fresh earthy scent in the ear. In America, the song Emotions by Mariah Carey is on top of the singles charts.

Over in the UK, (Everything I Do) I Do It For You by Bryan Adams is the number one hit song. George W. Bush Snr. is currently the President of the United States and the movie The Fisher King is at the top of the Box Office. In the United Kingdom, John Major is the current Prime Minister.

A rock subgenre called "Grunge" is starting to rise in popularity. Tributes are pouring in for American musician Miles Davis, who has passed away at the age of 65. Davis' doctor has announced that the famous jazz trumpeter died of a stroke, pneumonia and respiratory failure. Actress Elizabeth Taylor has just married construction worker Larry Fortensky, who is 20 years younger than her. This is Taylor's 8th marriage.

In Croatia, the Yugoslav Army are currently laying siege to the city of Dubrovnik. It has also recently bombed the office of Croatian President Franjo Tuđman. In Europe, the Soviet Union is continuing to dissolve and the KGB has been officially replaced by the SVR. On TV, people are watching popular shows such as "Only Fools and Horses", "'Allo 'Allo!", "Sherlock Holmes" and "Family Matters".

Meanwhile, gamers are playing titles such as "Duck Hunt", "Phantasy Star II", "Battletoads" and "Sonic the Hedgehog". Children and teenagers are currently watching television shows such as "Adventures of the Little Koala", "Clarissa Explains It All", "The Ren & Stimpy Show" and "Home Improvement". Popular toys include the likes of "Sega Genesis / Mega Drive", "Yo-yo", "G.I. Joe (figures)" and "The Super Nintendo Entertainment System (SNES)".

Celebrities, historical figures and noteable people who were born on the 11th of October:

Who was the Prime Minister of the United Kingdom on October 11th, 1991?

Enter your date of birth below to find out how old you were on October 11th, 1991.

Looking for some nostalgia? Here are some Youtube videos relating to October 11th, 1991. Please note that videos are automatically selected by Youtube and that results may vary! Click on the "Load Next Video" button to view the next video in the search playlist. In many cases, you'll find episodes of old TV shows, documentaries, music videos and soap dramas.

Here are some fun statistics about October 11th, 1991.