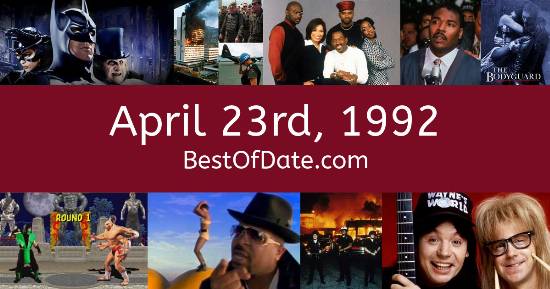 Songs that were on top of the music singles charts in the USA and the United Kingdom on April 23rd, 1992.

The date is April 23rd, 1992 and it's a Thursday. Anyone born today will have the star sign Taurus. The summer of 1992 is drawing closer and temperatures have started to rise.

In America, the song Jump by Kriss Kross is on top of the singles charts. Over in the UK, Deeply Dippy by Right Said Fred is the number one hit song. George W. Bush Snr. is currently the President of the United States and the movie Sleepwalkers is at the top of the Box Office.

The trial of four police officers for the 1991 beating of Rodney King back is currently taking in Simi Valley, California. In fashion, many of the trends from the late 80s are still in vogue. Colored tights, denim overalls, leotards, flannel shirts and shoulder pads are all fashionable at the moment. Grunge fashion has also become mainstream, popularizing band t-shirts, ripped jeans, mom jeans and Doc Martens. A war has broken out in Bosnia and Herzegovina following the shelling of Sarajevo by Serb forces.

In London, a televised "Freddie Mercury Tribute Concert" has been broadcast to one billion people. In the Mexican city of Guadalajara, 215 have been killed after fuel that had been leaked into a sewer causes multiple explosions. On TV, people are watching popular shows such as "'Allo 'Allo!", "The Golden Girls", "One Foot in the Grave" and "Dinosaurs".

Meanwhile, gamers are playing titles such as "Duck Hunt", "Streets of Rage", "F-16 Combat Pilot" and "Street Fighter II: The World Warrior". Kids and teenagers are watching TV shows such as "Beverly Hills, 90210", "The Ren & Stimpy Show", "Doug" and "Taz-Mania". If you're a kid or a teenager, then you're probably playing with toys such as the Easy-Bake Oven, Transformers, the Game Boy and Super Soaker (water gun).

John Major was the Prime Minister of the United Kingdom on April 23rd, 1992.

Enter your date of birth below to find out how old you were on April 23rd, 1992.

Leave a comment and tell everyone why April 23rd, 1992 is important to you.